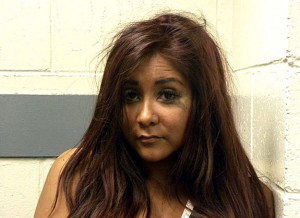 Smile Snooki!!!! Here is Jersey Shore star Snooki’s police mugshots. Snooki, whose real name is Nicole Polizzi, was picked up by police in Seaside Heights, New Jersey, on Friday, where she is filming the latest series of the hit MTV show.
She then spent several hours in custody on disorderly conduct charges before being released with a summons.