On The Rocks Whiskey Stones

What Do Tiger Woods, Paris Hilton, and Barack Obama... 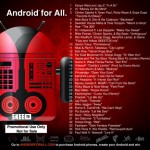 and as a result created the official Android for All mixtape featuring a number of artists. In conjunction with the release of the mixtape, MetroPCS is launching a contest in which aspiring artists and Android fans create their custom Google Android character for a chance to have their design produced as a one-of-a-kind vinyl toy.  Prominent tastemakers including DJ Khaled, Stars and Straps, and Warren Sapp are already involved with the new campaign. The Android for All mixtape includes tracks from established superstars like Kanye West, Jay-Z , Akon, Snoop Dogg and more.

For more information about the contest visit www.androidforall.com. To download your FREE copy of the mixtape go to www.DJSkee.com or DjBooth.net.