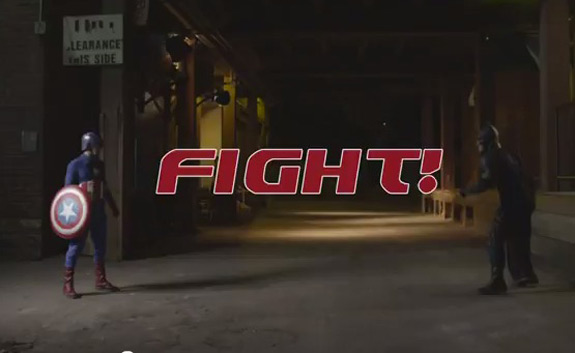 We have one simple question: who do you think would win a battle of the superheroes, Batman or Captain America? To put an end to that debate (or to heighten the debate), someone thought it would be a good idea to let fans decide. A well produced video (see below) shreds light on this fascinating concept by showing both iconic superheroes duking it out as fans dictate the outcome.

Here are just a few of the comments shared on YouTube.com. What do you think? Let the debate begin!

Batman would win, hands down. People underestimate him just because Marvel hyped up Captain America. If they read any Batman comics, they’d understand Wayne’s martial arts prowess. He’s one of the greatest martial artists in the DC Comics Universe; if not the greatest. Not only that, but I doubt he’d get into a fight without first identifying key weaknesses in the Cap’s fighting style. He has the athletic prowess, formal training, and brains to best even his team, much less a super soldier.

One Response to Batman vs. Captain America In Real Life [Video]