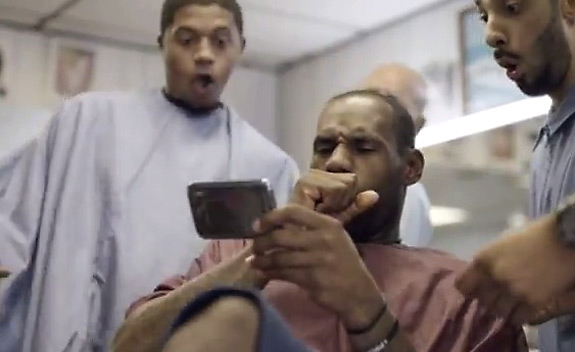 The 2012-13 NBA season kicked off with a double hitter. Well actually it was a triple hitter, but let’s face it, no one really cared about the Wizards at the Cavaliers. While suspense continued to build around whether or not Kobe and Dwight Howard would play together in the Lakers season opener, most of the hype was given to LeBron James and the Miami Heat championship ring ceremony. With so many story-lines to choose from including Ray Allen making his debut in a Miami Heat uniform, all eyes were definitely on LeBron James.

If you weren’t fortunate enough to be in Miami and you watched the game on TV, you were consistently reminded why LeBron is King. In addition to a stellar performance on court, Samsung unveiled the new LeBron James commercial featuring the Samsung Galaxy Note II. Even if you are an iPhone or Blackberry user, you couldn’t help but notice the carefully crafted commercial. The commercial delivered everything and for a brief moment erased all doubts that LeBron is the future of the NBA. If anything, it made him “likeable.” Check out the commercial which chronicles a day in the life of LeBron and let us know what you think.