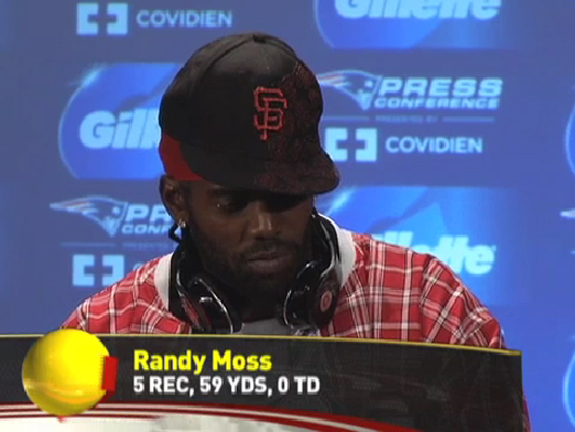 Did you really think we would be able to escape the first week of football with out some player either complaining or going off on a crazy rant? Just some happen fans were given a few classic post-game moments from both Terrell “T.O.” Owens and Randy Moss who spoke for nearly 14 minutes about his contract situation with the New England Patriots. Since we have grown to expect the unexpected from T.O., let’s focus on Randy Moss’ “interesting” post-game conference after the Patriots’ 38-24 win over the Bengals.

Randy Moss: “We’re not going to wait on everybody, but before I get to questions, man, I’d like to say something. You know, I’ve been here for three years, this is my fourth season. And I understand the business, the nature, and I understand you all have a job to do.
“When it comes to football, I take my job seriously, as I’ve said time and time again. And I think there’s . . . I don’t really want to say here in the organization, but I think here in the area, I think here in the New England area a lot of people don’t want to see me do good. The reason why, I really don’t know, I really don’t care. But I just want to let you all know, you are the ones doing all the writing, you have the pad and ink, and I don’t have anything. Anything that I may say will get blown out of proportion. I think earlier in the week I got asked a question about me being here and being unhappy. And me being unhappy doesn’t have nothing to do with me toning my game down. I’m here, and I understand my role. My role is to take the ball deep and take the top off the defense. And I think earlier in the week a lot of people were coming at me long about me being unhappy.

“You know, for instance, if you work for somebody, and you work for somebody unless you’re independent, and your boss comes to you, sometimes you want your boss to tell you that you’re doing a good job. You know what I’m saying? That’s every man or woman in here that works for somebody. You want your boss to be able to say he read your column last night or this morning, he liked your column. And that’s just the way with football. If you do a good job and you think that you’re doing a good job, you want to be appreciated, man. I really don’t think that me personally, I’m appreciated. I don’t want you all to take anything out of context that I’m saying, because I am a man and this is a job. And I take my job very seriously to heart. 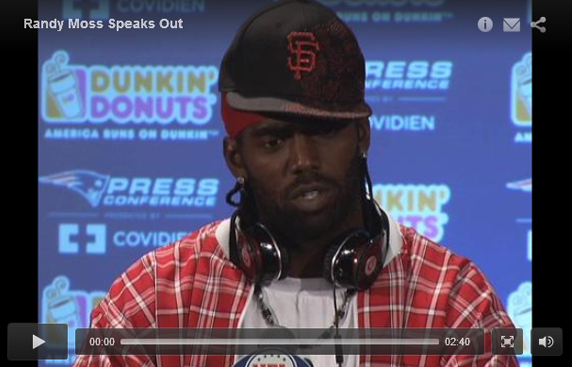 “I want to let you all know, I want to let the fans — the real fans — of the New England Patriots know that I’m not here to start any trouble, I’m going to play my last year out on my contract, and as I’ve said time and time again since I signed my first contract here, I want to be here in New England. It’s a great group of guys here, a well-coached group here, and I never said I want to leave New England. But I think that a lot of things that are being written or has been said is looking at me in a negative light, and I don’t want it to be in a negative light. I just want everybody to understand you can print it, I don’t care how you put it on me, but, you know, I want to be here as a Patriots, I love being here, but I just think, from a business standpoint, this probably will be my last year here as a Patriot. And I’m not retiring, I’m still going to play some football. So I just wanted to get that off my chest, and let you all understand, man, because this is a business. I’ll open it up for questions.”

Do you understand how bad this looks to stand up here and talk about this after a win?

“You know what? I can honestly say this. I don’t talk much. And I don’t want to take away from the win. But I think that before this season gets started I don’t want to be Week 10, Week 11, Week 12 where we’re still here talking about a contract.

“You’re not going to hear much from me this year. Basically, that’s what I’m trying to tell you. So let’s get it out of the way now.”

If the organization came to you and offers you a contract extension, would you sign it?

“Look, I don’t want to talk about [my] contract. I just want to let you all know because I’m here to play my last season out. OK? If opportunity later on this season presents itself for me to be a New England Patriot, I will accept that. But if it doesn’t, I must move on. That’s basically what I’m trying to tell you. Like I said, Week 9, Week 10, Week 11, whenever down the road, I don’t want this to fall back on my lap. This is Week 1 so I’m trying to get this out there right now. So everybody can print it, write it, and I don’t have to copy it.”

What if that opportunity presents itself in the offseason?

“I don’t really want to get to that. I’m 33 years old. I think that when you’re brought into this league early, you’re played off of what you’re capable of doing. I’ve already shown that I can play still at a high level at age 33. To be offered a contract after this season is over, that would be a smack to my face. I’m don’t even really want to get into that, you know what I’m saying?”