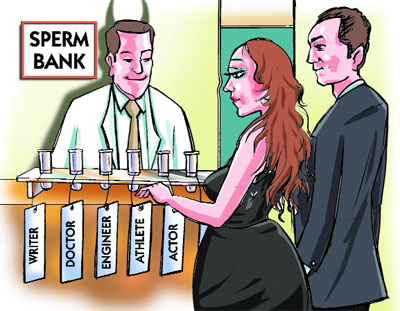 It was recently reported that two men from Reading, Berkshire, England decided to make a few bucks off overflow of sperm (okay, maybe excess would be a better word, but who could resist). No matter, with women concerned over their biological clock -- or simply not wanting a man in their life -- what better way would those of the male persuasion attempt to "fix it" for women while still adding a few dollars to their own bank accounts? Makes total sense, right?

Actually, it's nonsense thanks to the UK's Human Fertilisation and Embryology Act and may 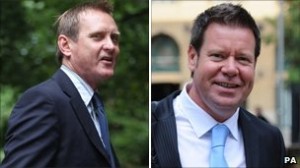 send the men to jail. Ricky Gage, 49, and Nigel Woodforth, 43, were allegedly running Fertility 1st without a license, allowing anonymous donors to shall we say, hand out their sperm for reasonable fees and compensation, of course.

According to the website, the "life-changing opportunity" allowed women to select sperm donors based on height, weight, hair color, even hobbies the donors enjoyed.

Prosecution puts forth that women paid approximately $103 to join, a $386 usage fee, and $193 for delivery through a courier once the specific sperm was selected. (Not bad considering a nice bottle of wine and dinner could cost the women just as much for a non sure thing.)

Gage and Woodforth argue their company was just an information site acting as an introduction database -- they weren't scoring any sperm, nor were they selling it. However, prosecutors disagree as a company list showed 792 deliveries made between October 2007 and November 2008, proof of illegal procuring of sperm without a license, and making the $324,000 and change illegitimate income. The men were arrested as the result of undercover police work.

The trial will continue and we'll see if the men eventually face hard time.

Unplugged via the BBC