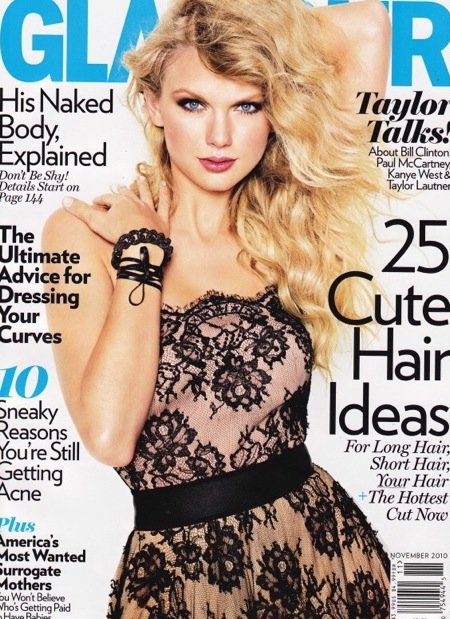 Named one of Time magazine’s 100 most influential people in the world, this has been Taylor Swift’s year. Did you know that Taylor Swift had the top-selling album of 2009 and that she recently became the female artist with the most Top 40 singles this decade? She also won four Grammys, including Album of the Year, met Bill Clinton and sang onstage with Stevie Nicks.

Glamour Magazine had a chance to sit down with Taylor and below are a few Q&A’s from their conversation.

GLAMOUR: This has been a crazy year for you: Have you had time to appreciate what you’ve achieved, or is it too much to take in?

TAYLOR SWIFT: I’ve gone through a few different phases of gratitude. When it’s happening, you’re all about [what’s next] and trying not to make a misstep. When it came time to lock myself away and make my next album, I had a feeling of, Wow, that really was something, wasn’t it? I drive down the same streets I used to drive years ago, when I was just dreaming about stuff like this. So I feel total happiness and anticipation for the next thing.

GLAMOUR: What is next?

TAYLOR SWIFT: My next album is something I’m really proud of. I can only write about what I’ve been through. And a lot has happened in the past two years.

GLAMOUR: Like that song about Kanye [who famously dissed her at the 2009 MTV Video Music Awards]?

TAYLOR SWIFT: [Laughs.] Everything that happens to me gets put into a song. For some reason, I’m really comfortable talking about my personal life in songs. There, I don’t hold back: names, dates, times, expressions on people’s faces, exactly where we were and how it felt, what I wish I would have said to them in the moment. So I’m not only excited about sharing the songs with fans; I’m also pretty interested to hear the response from the guys I’ve written about on this record.

TAYLOR SWIFT: I’ve learned that you can’t predict it or plan for it. For someone like me who is obsessed with organization and planning, I love the idea that love is the one exception to that. Love is the one wild card.

GLAMOUR: Are there qualities you look for in a guy now that you wouldn’t have looked for when you were younger?

TAYLOR SWIFT: When I’m getting to know someone, I look for someone who has passions that I respect, like his career. Someone who loves what he does is really attractive. In high school, I used to think it was “like sooooo cool” if a guy had an awesome car. Now none of that matters. These days I look for character and honesty and trust.

For more on the interview make sure to visit Glamour.com.