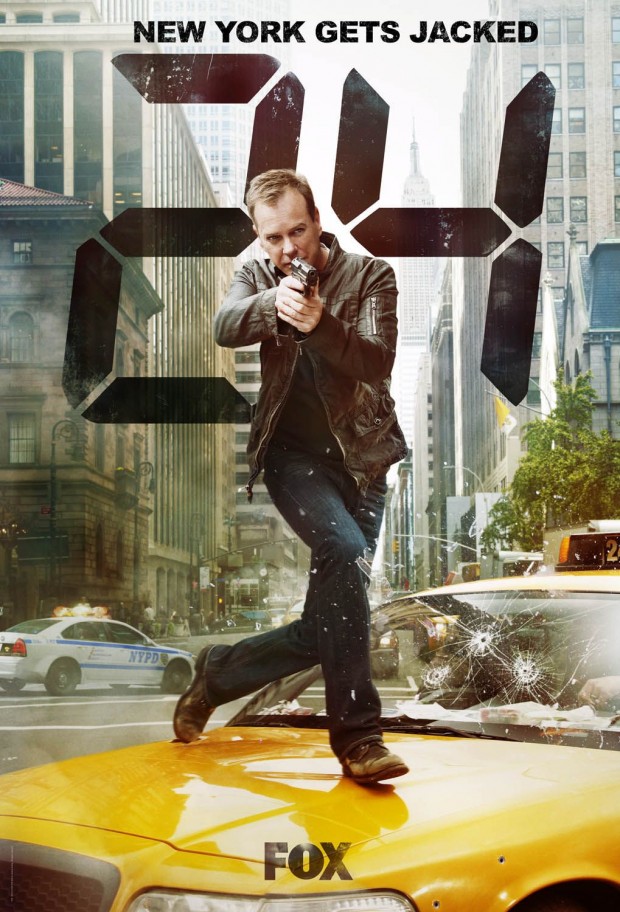 3 Ways to Save Fox’s 24 From Being Cancelled

Rumors are swirling and several articles have surfaced alluding to time possibly running out for Kiefer Sutherland aka Jack Bauer on the hit TV show 24. Although it has not been officially announced, Fox TV appears ready to put an end to the show and is extremely quiet regarding news on whether or not there will be a season 9.

As an avid viewer of 24, admittedly I have mixed feelings. I can’t say that it comes as a huge surprise, but I will say the news is nothing short of disappointment. Up until this season, I never missed an episode and I looked forward to spending my Monday nights with the volatile man known as Jack Bauer. With talk of the shows demise, I started to wonder, what went wrong? Similar to Fox’s once popular and cult like show X-Files, it appears that the show went from being a hit to a dud all in one season. Unlike X-Files, I don’t think 24 is too far gone where it couldn’t be saved if the show did the following:

Leave New York!
The show has been lackluster since Jack landed in NY to help fight crime. Aside from horrible script writing, it is no coincidence that the show’s ratings have declined since landing in New York City. When Hank Williams Jr. stated “Just send me to hell or New York City, it would be about the same to me”, he should have been speaking about Fox’s 24. New York City has been nothing short of being in hell for Fox’s 24 and since embarking on an uncharted journey in the big apple the show has definitely been missing something.

New Hero
Freddie Prince Jr.? Be clear, Jack is the one and only star of the show, but he definitely could use some help. Aside from Chloe O’Brian who has experienced a reduce role, Jack Bauer is really all alone. The new CTU cast of characters is far from likeable. The show needs another Tony Almeida. A character that you love to hate would do the show some good. No one likes the new CTU go to gal Dana Walsh. She is just as horrible as her CTU boss Brian Hastings. Both do nothing for the show. Their ability to express any emotion plays a role into why the show has not been able to deliver any real ratings this year. Fans continue to watch the show out of respect, but let’s face it the show is in need of a new hero to compliment Jack’s crime fighting efforts.

New Time Slot
If Fox execs refuse to get better writers for season 9 (if they make it that far) one idea that may serve to boost ratings is a changing the time slot. Maybe it’s just me, but I have fallen asleep on almost every episode that has aired this season. Wait… maybe I am not that tired. Could it be that the show is just that boring it puts me to sleep? Regardless, I think the show could definitely benefit from an earlier time slot. Also, with Fox’s show House reaching what I would categorize as its low point, why would you have a powerhouse show such as 24 following?

If the inevitable happens and 24 is cancelled, there is definitely a bright side to the madness. As I type this, Keifer Sutherland and the “24” franchise are keen on turning the show into a movie property! Recently, they have made major strides towards making the long-term goal of a movie turn into a reality. Let’s just hope they don’t make the mistakes of X-Files creators. The first X-Files movie was cleaver, but somewhat forgettable. The second movie 10 years later was just flat out lifeless and had nothing to do with the true meaning of the franchise. For Jack Bauer’s sake, we hope the movie is a 2-hour presentation encompassing all the things that loyal fans embraced from the first seven seasons of the TV show.