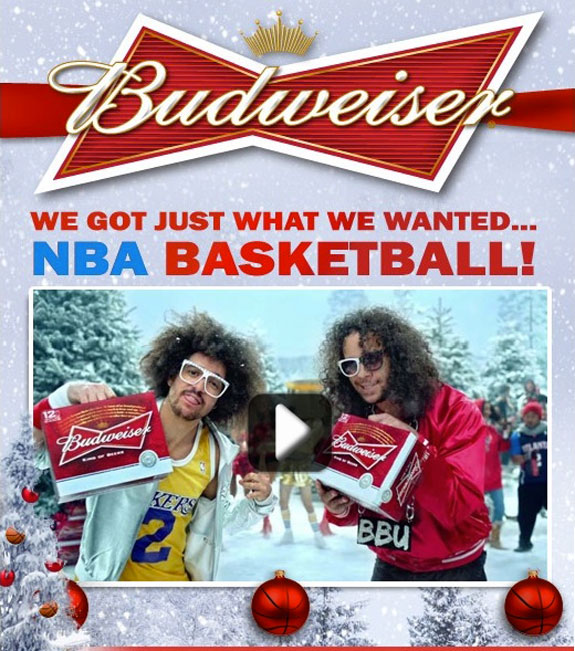 “Big things are coming, grab some buds.” Watching the debut of the NBA season on Christmas day felt a lot like Super Bowl Sunday. From the Janet Jackson Nutrisystem commercial, to Puff Daddy aka P. Diddy’s Ciroc Vodka commercial viewers seen pitches from some of their favorite celebrities including Charles Barkley. If you didn’t know, Charles is pushing Weight Watchers for men. For those who were watching TV yesterday, the most noticeable commercial was probably the LMFAO Budweiser commercial with NBA owner Mark Cuban, ex-NBA player Steve Kerr, actor Luke Wilson, Emmanuelle Chriqui (Sloan from HBO’s Entourage), and a few NBA cheerleaders. From the small buzz on Twitter, the commercial definitely seemed to be a fan favorite. In addition to showcasing some unfamiliar celebrity faces in the endorsement world (Steve Kerr), the commercial notable skips #7 in their attempt to countdown the 12 days of the NBA season.

I am sure we would all agree this is a great commercial, right? However, from a marketing standpoint the campaign falls short. There was no buzz leading up to the commercial. Budweiser didn’t even bother to promote the commercial via their official social media channels (YouTube, Facebook, Twitter, etc), so fans interested in checking out the video were reduced to looking at bootleg versions of it on YouTube, and more importantly, their is no explanation of why day 7 (wait, did you even notice that?) was skipped in the 12 days of NBA countdown. In a day where content is king and social media is queen, Budweiser is falling short with the lack of information regarding this commercial.