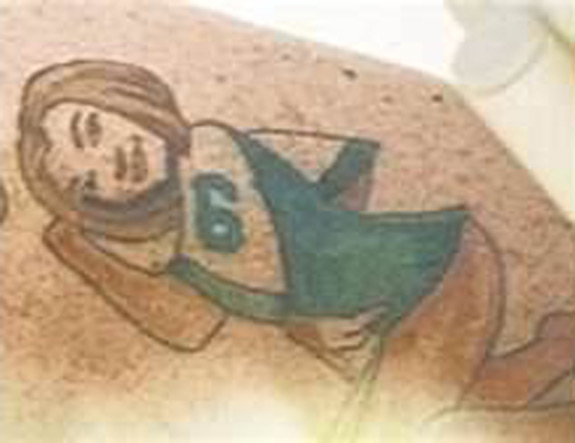 Say it ain’t so Sexy Rexy! This tattoo has to be a joke, right? Talk about a blessing and a curse. Obviously the blessing being his wife who puts up with his shenanigans and the curse, well you get it.

If you read this website and follow my Tam-Star pick em’s, you know that I am a huge fan of big sexy. Through thick and thin, I have been down with the J-E-T-S since 1997. Even when Fireman Ed threw in his towel, I still rooted for the J-E-T-S. If the tattoo above of Rex’s wife ‘Tebowing‘ in a Mark Sanchaz jersey is real, even I will go on record saying that Rex is ‘touched.’ For those that don’t know, touch is a polite way of saying dude has issues. For now, I still love you Sexy Rexy, but please tell them it’s not so. It’s a fake tattoo, right? Guess it’s time to get a ‘goddamn snack‘ and laugh at the upcoming jokes regarding this ridiculous tattoo.