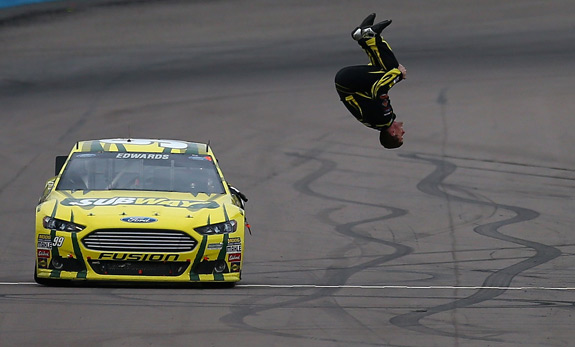 Carl Edwards literally flipped out and took the checkered flag at the Subway Fresh Fit 500. Carl led 122 of the 316 laps at Phoenix International Raceway to win his first NASCAR Sprint Cup Series victory in almost two years. In a thrilling green-white-checkered-flag finish that took the race four laps past its original distance of 312 laps, Carl demolished a 70-race losing streak to win his 20th NASCAR Sprint Cup Series victory.

“To be in Victory Lane this early in the season, to have a car like we had today, it’s really great,” Edwards said. “This win was as good or better than any win I’ve ever had…I’m very, very happy to be back in the mix here. A victory is huge for so many reasons. Last year we didn’t make the Chase. For me to sit home while everybody was at the Chase stuff in Vegas—that was a little bit of a shock to me. I did not like that at all.” 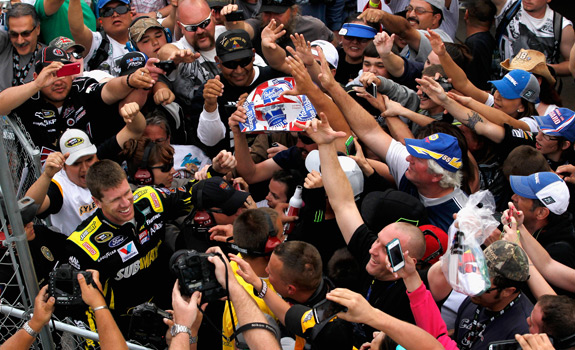 Many, including myself, believed that a caution flag with three laps to go would definitely change everything for Carl. With Denny Hamlin, Daytona 500 champ Jimmie Johnson and last year’s Sprint Cup Series winner Brad Kewseloski all battling for the lead, Carl withstood the push to take his second victory at Phoenix. It’s always a thrilling race when there is a caution flag in the last couple of laps, but Carl proved that it was his day to win. 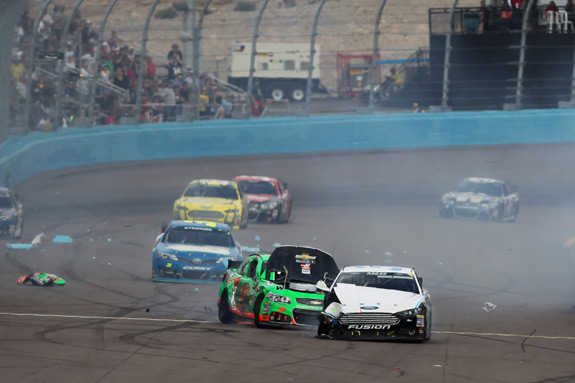 While Carl was having a career day, Danica Patrick was back to her old ways. After experiencing issues with her right tire, which exploded, Danica drove her Chevy into the wall and as she bounced off was hit by David Ragan, who had nowhere to go.
Thankfully, Danica was okay after the hard collision, but she had to head into the garage. Danica’s car was totaled when David ripped off her driver’s side door and the foam that protects the door frame. Her day was disappointing, to say the least, after such an impressive run at Daytona. She finished the Subway Fresh Fit 500 in 39th place. 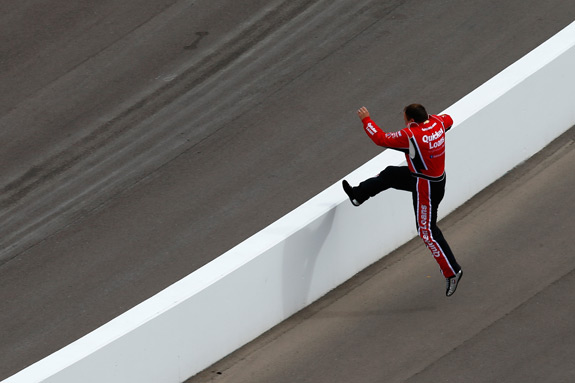 Ryan Newman, who also drives a Chevrolet, had a “Danica Day” as well. He crashed into the wall not once, but twice due to separate front tire issues. The damage from the second incident proved to be too much. In lap 141, Ryan slammed into the turn one wall, bringing out the 5th caution flag of the day. When asked by the team of his status, Ryan replied, “Yeah, I’m fine.” After the crash, Ryan exited the car and ran across the track to the pit, refusing to ride in the ambulance. It will be interesting to see if NASCAR will reprimand him for his actions.

Not to be outdone by anyone in the shenanigans department, Clint Bowyer nearly ran over one of his pit crew members. With one of his crew men in front of his car, Clint received the go ahead signal. The miscommunication caused Clint to hit the crew member. Luckily, he didn’t run him completely over and he was okay, but not before he went sliding over his hood.

54-year-old Mark Martin was having an impressive day and even lead the race 75 laps, but he somehow fell short of breaking the top 10. Dale Jr. lead 47 laps and at one point it looked like he would possibly take the checked flag. Jimmie Johnson, Denny Hamlin, Brad Keselowski, Dale Earnhardt Jr., Clint Bowyer, Matt Kenseth, Tony Stewart, Jeff Gordon and Jeff Burton all finished in the top 10, respectively, after the Subway Fresh Fit 500 winner Carl Edwards. It’s worth noting that Jimmie only lead one lap of the entire race.