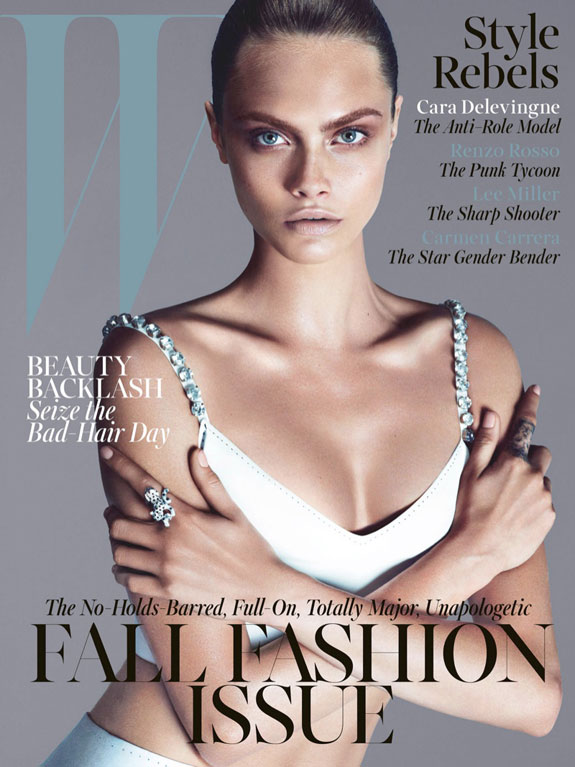 British model Cara Delevingne who is known for her partying, trademark eyebrows, and expressive face is gracing the cover of the September 2013 edition of W Magazine. The “style rebel” is clear about what she wants stating, “I want to make music, I want to act, I want to sing,” Cara tells the magazine about her aspirations. She also goes on to talk about how she almost became Alice In Wonderland. Knowing the little bit we do know about Cara she would have made a very devious Alice. Check out some of her story below and make sure to head over to Wmagazine.com for the full article. 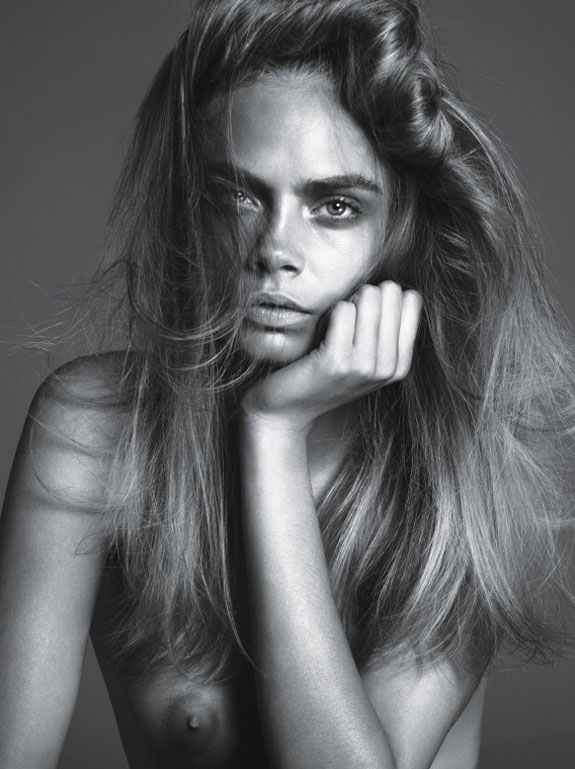 “In the beginning, I was thinking, How do I set myself apart from the other girls?” Delevingne said. “So many girls were taller, skinnier, and prettier. And I’m not a girly girl at all—I didn’t get boobs until I was around 18! As a teenager, I kept thinking, I’m so short, and I have no boobs—what do I do?” ­Delevingne said, laughing. She began to look at modeling as playing different roles. “Maybe that’s why I’ve been noticed,” she said. “I treat the camera like a person—I gaze into it. Photos are a flat thing, and you need to put life into them.”

Actually, Delevingne modeled for the first time when she was 10, in a story shot by Bruce Weber for Italian Vogue. She was “discovered” by Sarah Doukas, the owner of a London modeling agency whose daughter went to school with Delevingne and her sisters, Chloe and Poppy. The Delevingne girls are British aristocracy: Their mother, Pandora, was an It girl in the ’80s before she married Charles Delevingne, whose grandfather was a viscount. Pandora, who until recently was the head of personal shopping at Selfridges and counts the Duchess of York among her closest friends, once had a nasty heroin addiction. (It has been rumored that Poppy was named for the drug.) Pandora was in and out of rehab for much of the girls’ childhoods.

Being the youngest, Cara may have not seen her mother at her worst, and she had the advantage of watching and learning from her older sisters. “Poppy was a model, and I never liked to do the same things my sisters did,” Cara explained. “After the Bruce Weber shoot, I didn’t think about it. I wanted to be either a musician or an actress.” She has played the drums since childhood and was in a band, the Clementines, when she was 12. It was around that time that she asked her parents for an acting agent as a present. “I wanted to be a Disney Channel star! I wanted to be Hannah Montana. They said no!”

At 17, while she was a student at Bedales, a very arty private school in Hempshire, Delevingne got word of Tim Burton’s big-screen production of Alice in Wonderland and made an audition tape. “My interpretation of Alice was a little crazy,” she said, laughing. “I overplayed it—the way a young girl would overplay all her emotions. I sent my tape off, and then I was at a wedding and this woman came over to me. She said, ‘You don’t know me, but I know exactly who you are.’ ” It was Lili Zanuck, the wife of Richard Zanuck, the film’s producer. “She told me that they all loved my tape!” Delevingne recalled. “And I went to Tim Burton’s house and met with him. I didn’t get the part, but that experience lit a fire in me.”

That anecdote is classic Delevingne—talent plus grand ambition plus an ease and familiarity with the wide world. Whether it’s due to her posh background or her innate confidence—or both—Delevingne has a keen sense of her own potential. She has trademarked her name and has created social media accounts for Cara’s Eyebrows, Cara’s Thigh Gap, and Cara’s Bog Eye, which are, in that order, odes to her striking caterpillarlike eyebrows, the space under her crotch between the top of her thighs, and the funny faces she makes. She is also on Instagram constantly, where she has more than 2 million followers. Many of her posts are playfully provocative: Cara in a midriff-baring sweater, being licked on her stomach by SpongeBob SquarePants; Cara about to kiss her “wifey,” Rita Ora; Cara posing, like a rapper, with fans she calls her ­Delevingners. There are also shots of her blowing smoke rings backstage at a fashion show and partying with other models. Her bad-girl selfies have fueled gossip that Delevingne is taking after Moss in darker, more troubling ways. At the Cannes Film Festival in May, she was reportedly so drunk at a party on a boat that the hostess, afraid Delevingne wouldn’t make it back to her hotel, had her stay aboard for the night.