101 Things You Didn’t Know About Sex

The Sport of Wife Carrying 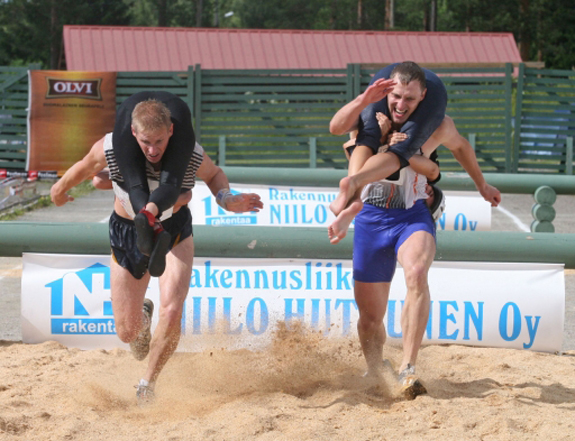 Today the Wife Carrying World Championships are being held in Sonkajärvi, Finland. I bet you didn’t know that “Wife Carrying” is a sport! Leave it up to a MAN to create a sport based around carrying a female on his back.

Introduced in Sonkajärvi, Finland, Wife Carrying is a sport in which male competitors race while carrying a female teammate through a special obstacle track. Male competitors may carry their female teammate in several ways including piggyback, a fireman’s carry (over the shoulder), or Estonian-style in which the wife hangs upside-down with her legs around the husband’s shoulders, holding onto his waist.

In Finland where the prize depends on the wife’s weight in beer, at least 52 couples from 14 countries are preparing for the world championships making Wife Carrying a global sport, I guess. Other major wife-carrying competitions are held annually in Finland, Wisconsin and Michigan with the North American Wife Carrying Championships taking place every year during Columbus Day Weekend at Sunday River Ski Resort in Maine.

• The wife to be carried may be your own, the neighbour’s, or you may have found her farther afield; she must, however, be over 17 years of age
• The minimum weight of the wife to be carried is 49 kilos. If it is less than 49 kilos, the wife will be burdened with such a heavy rucksack that the total weight to be carried is 49 kilos.
• All the participants must have fun.
• If a contestant drops his wife, he has to relift her on to his back or in his arms and continue carrying.
• The only equipment allowed is a belt worn by the carrier.
• Also the most entertaining couple, the best costume and the strongest carrier will be awarded a special prize. 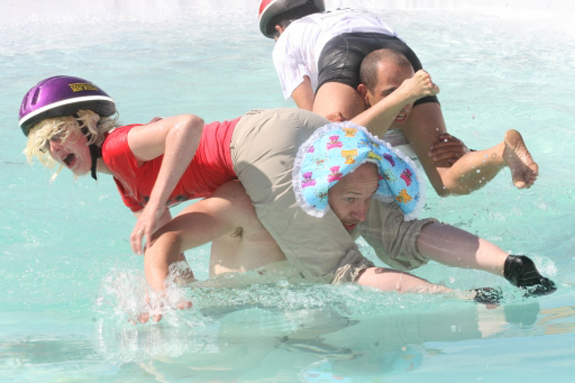 How to Become a Master in Wife Carrying:

Attitude
The wife carrying is composed of humor and hard sport on a fifty-fifty basis. Everybody may choose what attitude to take towards the competition. The course is open for all to participate.

Postures
There are four customary styles to carry the wife: the traditional piggyback, the wife dangling upside down on the carrier’s back, thrown over on the shoulder and crosswise on the carrier’s shoulders. The style is free. You may also create a new personal style of your own.

Outfit
It is preferable to wear clothes which won’t be stripped off in full speed running and which are easy to hold on to. The carrier’s belt is the only equipment allowed to help in keeping one’s grasp. Some other tools known to be beneficial are a bunch of birch switches, swimming glasses and swimming slippers.

Life
The wife carrying is an attitude towards life. The wives and the wife carriers are not afraid of challenges or burdens. They push their way persistently forward, holding tightly, generally with a twinkle in the eyes.

Eroticism
You can sense the excitement in the air during the wife carrying competition. The core of the race is made of a woman, a man and their relationship. The wife carrying and eroticism have a lot in common. Intuitive understanding of the signals sent by the partner and becoming one with the partner are essential in both of them – sometimes also whipping.

Wife
According to the rules the minimum weight of the wife is 49 kilos. If it is less, the wife will be burdened with such a heavy rucksack that the total weight is 49 kilos. Generally the best wife is the wife of one’s own, all the more if she is harmonious, gentle and able to keep her balance while riding on the shoulders of her man. 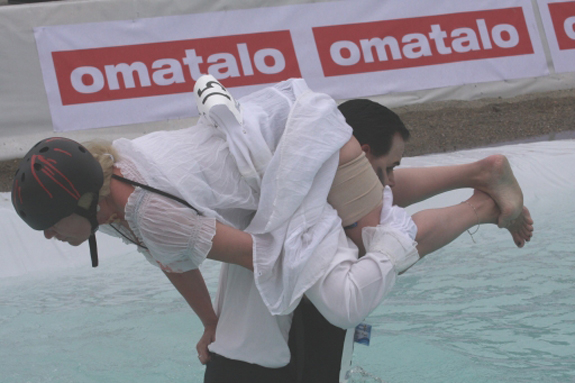 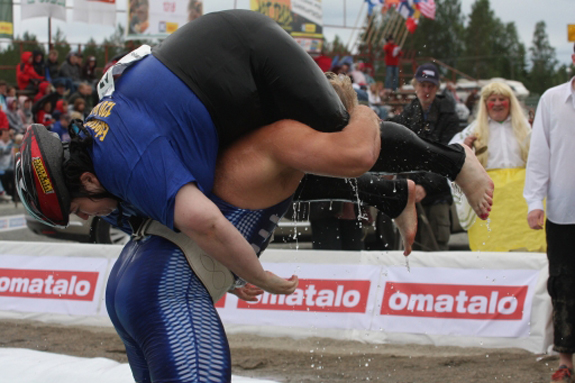