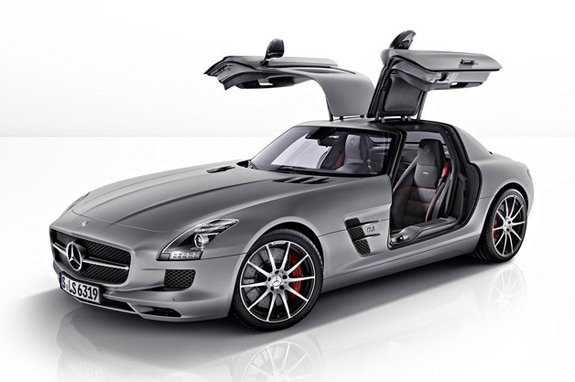 If you are a fan of the Mercedes-Benz SLS (and can afford it) you are in for a treat. This year’s model, the new SLS AMG GT package, will be on sale in mid-November 2012 will replace previous SLS AMG versions. The new GT will use the same 6.2-liter fire-breathing V8 engine from the current SLS, but has been increased to 583 hp at 6800 rpm allowing it to go from a 0-60 mph acceleration time in 3.6 (est) seconds with a max speed of 197mph. Can you imagine going that fast? In addition to engine tweaks, the SLS AMG GT has some additional changes including interior and exterior upgrades. Make sure to read about them in the press release below. 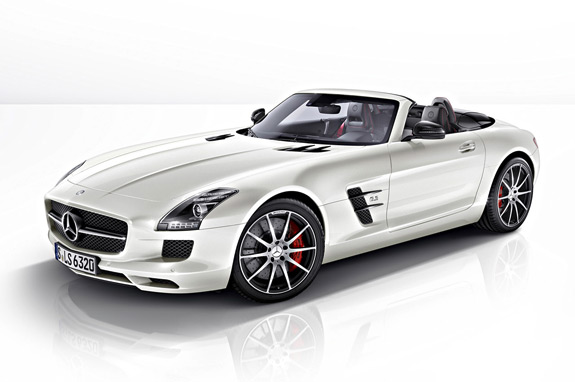 The new 2013 Mercedes-Benz SLS AMG GT boasts enhanced driving dynamics and even better on-track performance. With an enhanced maximum output of 583 hp (435 kW), a re-calibrated AMG SPEEDSHIFT DCT 7-speed sports transmission and the redeveloped AMG Adaptive Suspension, the new SLS AMG GT – which is available both as a Coupé and a Roadster – has raised the bar even higher. As a further highlight, a new optional AMG designo STYLE interior package is now also available for the 2013 SLS AMG GT. According to Tobias Moers, Board Member and Head of Overall Vehicle Development for Mercedes-AMG GmbH: “The new SLS AMG GT demonstrates the sort of potential which lies in AMG’s super sports cars. With its even higher levels of performance, the SLS AMG GT excites out on the race track in particular by providing an emotionally enjoyable and passionate driving experience.”

For MY2013 in the U.S., Mercedes-Benz will now exclusively offer the new SLS AMG GT. Available as a Coupe and Roadster, it will go on sale in mid- November 2012, replacing previous SLS AMG versions.

Masculine and decidedly athletic the new SLS AMG GT is distinguished by darkened headlamp and tail light lenses a unique wheel color and red-painted brake calipers. The wing-shaped cross fins and the star recess in the radiator grille are given a new high-gloss black finish, as do the exterior mirrors and the fins on the hood and front fenders. The AMG logo on the right of the trunk lid also features the additional letters “GT” to clearly identify this new model.

Now available with the introduction of the SLS AMG GT, is a new, highly exclusive option in the form of the AMG designo STYLE package. This expressive option is available in three different color combinations in both single and two-tone finishes. It comprises a distinctive upholstery design featuring full designo leather with a contrast stitching and a diamond quilt design on the seats and door panel inserts.

The AMG 6.3-liter V8 engine comes directly from the AMG engine workshop in Affalterbach, where it is hand-assembled according to the traditional “one man, one engine” philosophy.

The SLS AMG has succeeded in winning numerous comparison tests against a host of international competitors conducted by the international specialist media – both as the gullwing model and the Roadster. Since its world premiere at the IAA International Motor Show in Frankfurt in 2009 and the presentation of the SLS AMG Roadster in May 2011, the super sports car from Mercedes- AMG has picked up a total of 40 awards.