Caption This: Supermodel Gisele Bündchen Breast Feeds While Getting... 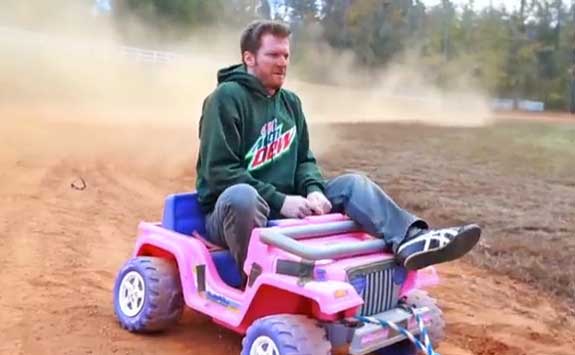 Dale Earnhardt Jr. was just voted NASCAR’s Most Popular Driver for the 11th straight year. So he would never be caught driving a princess-pink Power Wheel, right? Wrong. Our very own Tam-Star just got back from NASCAR’s Championship Week in Las Vegas where she rubbed elbows with some of NASCAR’s best including superstar Dale Jr. Tam got the 411 on Dale, the Mountain Dew crew, YouTube thrillophile Devin Graham, and the #DEWRoadTrip series.

Check out Dale and his buddies doin’ The Dew at Dale Jr.’s Dirty Mo Acres in North Carolina. The “Cardboard Rodeo” is the 4th installation in the series and shows the boys taking over the dirt track with cardboard surfing, Rubbermaid boogie boarding, and pink Power Wheel racing. You know, regular man-stuff.

VIDEO: Behind The Scenes – Cardboard Rodeo

Stay plugged in for the latest on the #DEWRoadTrip series via MankindUnplugged.com and in the meantime check out some more of Devin’s adventures.