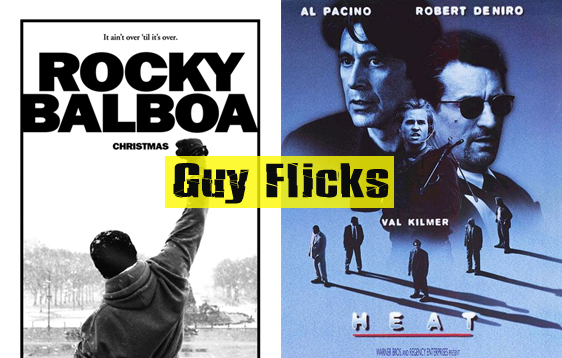 inStash.com published a Top 100: Great Movies Every Guy Must See list and I must admit I am pretty impressed. Usually when I read these types of list I always wonder to myself “why,” “how could they,” and “who wrote this.” However, I am excited to say none of that applies to their Top 100 list. With the exception of omitting Casino and Talladega Nights, their list seems to be complete. I was so impressed after thoroughly reviewing it, I decided to narrow it down to the top 25 movies every man must see from a girl’s view.

Tagline: A Philadelphia fighter who never made the big time…He showed he could take on a challenge…and won something bigger than a championship bout.

Plot: A small time boxer gets a once in a lifetime chance to fight the heavyweight champ in a bout in which he strives to go the distance for his self-respect.

Tagline: An offer you can’t refuse.

Plot: The aging patriarch of an organized crime dynasty transfers control of his clandestine empire to his reluctant son.

Tagline: On every street in every city, there’s a nobody who dreams of being a somebody.

Plot: A mentally unstable Vietnam war veteran works as nighttime taxi driver in a city whose perceived decadence and sleaze feeds his urge to violently lash out, attempting to save a teenage prostitute in the process.

Plot: Henry Hill is a small time gangster, who takes part in a robbery with Jimmy Conway and Tommy De Vito, two other gangsters who have set their sights a bit higher. His two partners kill off everyone else involved in the robbery, and slowly start to climb up through the hierarchy of the Mob. Henry, however, is badly affected by his partners success, but will he stoop low enough to bring about the downfall of Jimmy and Tommy?

Plot: A Los Angeles crime saga, “Heat” focuses on the lives of two men on opposite sides of the law – one a detective; the other a thief.

Plot: The planet from Alien (1979) has been colonized, but contact is lost. This time, the rescue team has impressive firepower, enough?

Tagline: If these two can learn to stand each other… the bad guys don’t stand a chance.

Plot: Martin Riggs is an L.A. cop with suicidal tendencies and Roger Murtaugh is the unlucky police officer with whom Riggs is assigned. Together they uncover a huge drug-smuggling operation, and as their success rate grows so does their friendship.

Tagline: You don’t stay at the top forever

Plot: Sam ‘Ace’ Rothstein, a mob-connected casino operator in Las Vegas, attempts a civilized lifestyle with his money-conditional wife, Ginger. Nicky Santoro, a boyhood friend of Ace and now a Made-Man of the Mafia, arrives in town with an ambitious agenda of his own that soon disrupts Ace’s life.

Tagline: In Detroit a cop learns to take the heat. In L.A. he learns to keep his cool.

Plot: A freewheeling Detroit cop pursuing a murder investigation finds himself dealing with the very different culture of Beverly Hills.

Tagline: It will blow you through the back wall of the theater!

Plot: New York cop John McClane gives terrorists a dose of their own medicine as they hold hostages in an LA office building.

Tagline: They call themselves “The Goonies.” The secret caves. The old lighthouse. The lost map. The treacherous traps. The hidden treasure. And Sloth… Join the adventure.

Plot: A group of kids embark on a wild adventure after finding a pirate treasure map.

Tagline: Father of a murdered son, husband to a murdered wife and I shall have my vengeance in this life or the next.

Plot: When a Roman general is betrayed and his family murdered by a corrupt prince, he comes to Rome as a gladiator to seek revenge.

Tagline: Dr. Hannibal Lecter. Brilliant. Cunning. Psychotic. In his mind lies the clue to a ruthless killer. – Clarice Starling, FBI. Brilliant. Vulnerable. Alone. She must trust him to stop the killer.

Plot: A young FBI cadet must confide in an incarcerated and manipulative killer to receive his help on catching another serial killer who skins his victims.

Plot: In Thailand, John Rambo joins a group of mercenaries to venture into war-torn Burma, and rescue a group of Christian aid workers who were kidnapped by the ruthless local infantry unit.

Plot: Luke Skywalker leaves his home planet, teams up with other rebels, and tries to save Princess Leia from the evil clutches of Darth Vader.

Plot: When a gigantic great white shark begins to menace the small island community of Amity, a police chief, a marine scientist and grizzled fisherman set out to stop it.

Tagline: John Landis – the director of Animal House brings you a different kind of animal.

Plot: Two American tourists in England are attacked by a werewolf that none of the locals will admit exists.

Plot: The lives of two mob hit men, a boxer, a gangster’s wife, and a pair of diner bandits intertwine in four tales of violence and redemption.

Tagline: What would you do if they destroyed your home, threatened your family. Where would you draw the line?

Plot: Peaceful farmer Benjamin Martin is driven to lead the Colonial Militia during the American Revolution when a sadistic British officer murders his son.

Tagline: First, he fought for the Crown. Now he’s fighting for the Family Jewels.

Plot: Dr. Evil is back…and has invented a new time machine that allows him to go back to the 60’s and steal Austin Powers’s mojo, inadvertently leaving him “shagless”.

Tagline: America Was Born In The Streets.

Plot: In 1863, Amsterdam Vallon returns to the Five Points area of New York City seeking revenge against Bill the Butcher, his father’s killer.

Plot: On his first day on the job as a narcotics officer, a rookie cop works with a rogue detective who isn’t what he appears as.

Plot: A man is picked up by a fishing boat, bullet-riddled and without memory, then races to elude assassins and recover from amnesia.

Tagline: The story of a man who could only count to #1

Plot: #1 NASCAR driver Ricky Bobby stays atop the heap thanks to a pact with his best friend and teammate, Cal Naughton, Jr. But when a French Formula One driver, makes his way up the ladder, Ricky Bobby’s talent and devotion are put to the test.

Tagline: Up there with the best of the best

Plot: The macho students of an elite US Flying school for advanced fighter pilots compete to be best in the class, and one romances the teacher.

2 Responses to Top 25 “Guy Movies” Every Man Must See