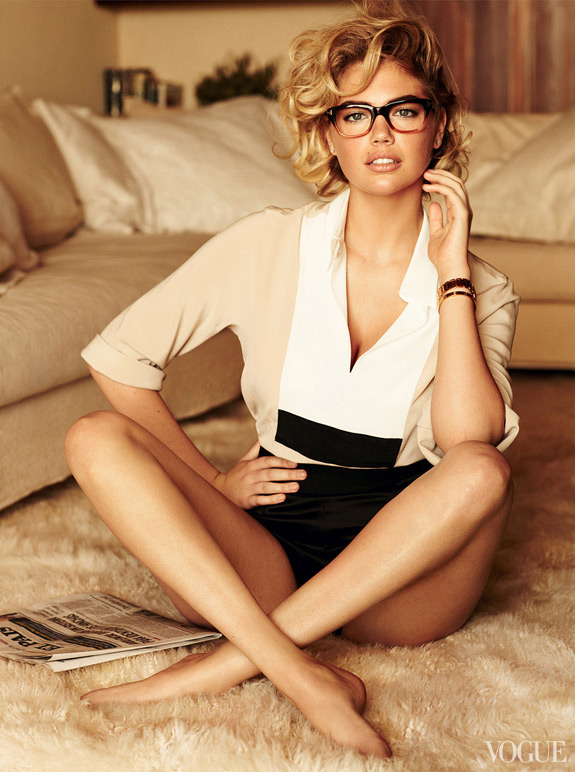 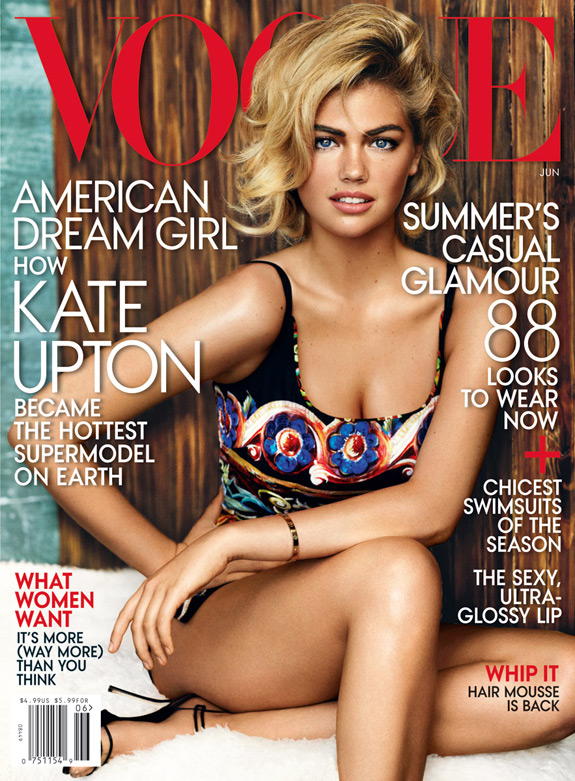 Is Kate Upton America’s favorite bombshell? We can’t give you a definitive answer, but Vogue sure seems to believe she is. Vogue acknowledges Kate’s “killer curves,” but they seem to believe that she has much more to offer including old-fashioned ambition, digital-age savvy, and personality to burn. Killer boobs and the “it” girl right now, sure; old-fashioned ambition… well. Below is an excerpt from the article. We will let you be the judge on whether or not Kate is truly the girl of the moment. 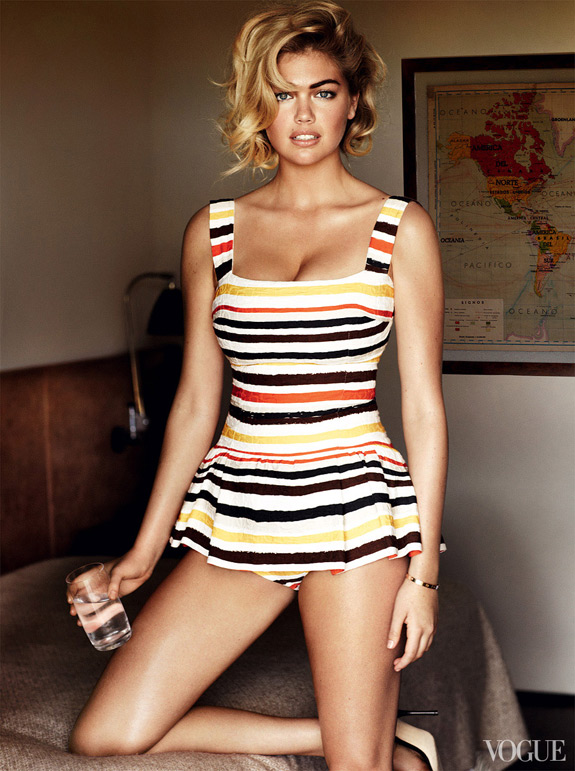 The fact that Upton has become our Girl of the Moment is all the more remarkable given that she’s done it in her own digital-age way. She wasn’t championed, early on, by a photographer like Steven Meisel or David Sims. Riccardo Tisci didn’t put her on the runway at Givenchy à la Joan Smalls. She even bypassed the Victoria’s Secret runway show—which has proved to be a launching pad for the likes of Candice Swanepoel and Miranda Kerr. Instead, Upton has accumulated Sports Illustrated covers and buzzy television ads and—above all—has made canny use of social media.

The Upton legend begins on YouTube. She broke out in 2011, dancing to Cali Swag District’s “Teach Me How to Dougie” in footage shot by a friend at a Clippers game—her appeal a mix of blonde bombshell and homespun girl next door. (The video has two million views and counting.) A subsequent clip was more risqué: Upton dancing the Cat Daddy in a skimpy bikini for Terry Richardson—and yet here, too, she’s goofy, disarming, improbably wholesome (that video has nearly sixteen million hits). Meanwhile she’s a regular on Twitter (more than 900,000 followers), and was an early adopter of the video-sharing app Vine. “It’s just me sharing my life,” she says about tweeting. “I like it if it’s authentic and in the moment and happening.” Growing up, she adds, “I didn’t buy the magazines that had models on the covers, because I didn’t know them. So I think this kind of gives me, as a model, a personality that people can connect with.” It seems to be working. In 2012, she was the fourth-most-popular search on Yahoo—just behind Election, iPhone5, and Kim Kardashian.

What makes the Kate Upton era so unlikely is that the things we love about her—those curves! that personality!—defy what the word model has come to mean, at least on the runway: a seemingly endless procession of lanky, expressionless wraiths. That is most certainly not Upton’s profile. (Descriptions of her figure tend to involve euphemisms for a single word: breasts.) And yet Upton’s body has sparked debate. This year’s Sports Illustrated cover—a shot of her in Antarctica, parka open to reveal a stunning breadth of cleavage—set off a fresh round of “Is she fat?” conversations across the Internet. “It was hard at first,” she admits of hearing such rumblings. “You sit there and you’re like ‘Is something wrong with me?’ ” But she’s learned to ignore her critics—and come to regard her healthy body as a point of pride. “The things that they’re rejecting are things that I can’t change. I can’t change my bra size. They’re natural! I can work out and I can stay healthy and motivated, but I can’t change some things. I really just live my life. I love my body. It’s what God gave me! I feel confident with myself, and if that inspires other women to feel confident with their bodies, great.”