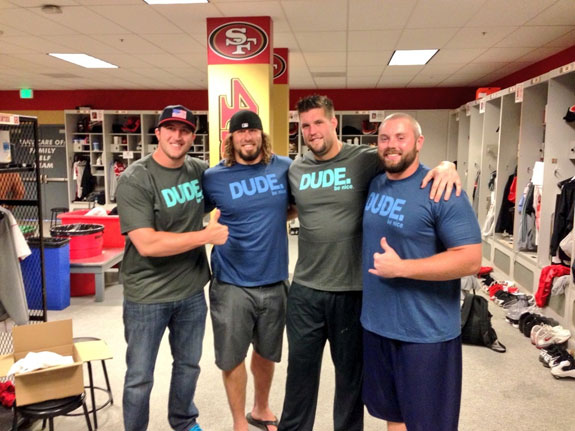 We all get caught up in our daily grind, getting annoyed by the little things and sometimes even showing total strangers our grumpy side. Then there’s Brent Camalich, who is making the world a better place – one Nice Dude at a time. He created his lifestyle brand, DUDE. be nice, in LA, a city where a little kindness can go a long way. Camalich’s goal is to remind us to treat others better. While wearing Dude. be nice gear may not change the world with a single t-shirt, the simple message may be enough to make a positive impact on people’s lives. Since we’re all about this kind of world of guy stuff, we wanted to share Brent’s ideas and inspirations. Check out the interview below with our very own Tam-Star to see what this Nice Guy had to say. And head over to www.dudebenice.com to pick up your Dude (or Dudette) merch. 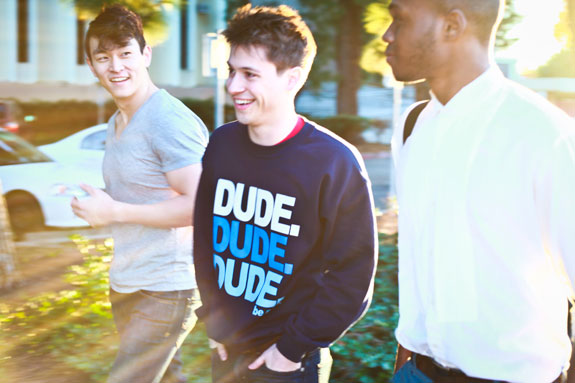 What inspired you to create DUDE. be nice?
The DUDE. be nice brand was actually created by a designer in LA named Markiss Alix&er. We were introduced through a mutual friend about 10 months ago. He shared his vision for the brand with me, and I immediately recognized that it was a project that I needed to be a part of. Like many of us, I have a desire to be involved in something with a purpose. It’s our goal to encourage people to add a little more ‘nice’ to their lives. We hope this will affect people in a positive way and inspire a movement that promotes this lifestyle.

Who do you consider to be the ultimate nice guy and nice girl? Why?
Kevin Durant – even though he plays for the Thunder and I’m a Lakers fan. While I’ve never met him, his actions suggest he’s a pretty cool dude on and off the court. I have a lot of respect for him for several reasons: He works hard, makes time for his fans, and was extremely generous in the wake of the recent tornadoes in Oklahoma. We hope to see him in a DUDE. be nice shirt one of these days.

If you had the power to add a little more “nice” to people’s lives, what would be your single most positive impact? What would you do/change?
I think the notion that “sticks and stones may break my bones, but words may never hurt me” is BS. Personally, it’s the negative things people have said to me that have affected me the most, and the same can be said of the words I have used towards other people. So, if I could make one global change, I would ensure that every person had the opportunity to hear or experience acts of kindness on a regular basis. I’m all for tough love for the sake of personal growth, but what if we made a conscious effort to build people up instead of tearing them apart?

What’s the nicest thing anyone has ever done for you personally?
I’ve been fortunate to be at the receiving end of quite a few generous acts and I have amazing selfless parents, but for whatever reason, here’s something I remember as being really cool. When I was a kid I was obsessed with action sports. BMX and skateboarding were my thing. One Christmas morning, I woke up to a brand new wooden ramp with my name stenciled on it. My neighbor had some great carpentry skills and apparently spent Christmas Eve building it for me. He left it on my back porch, so I would think Santa dropped it off. A really nice gesture just to give a kid a smile – I think that’s pretty cool.

What would people be surprised to know about DUDE. be nice?
When Markiss and I first partnered together, we quickly realized that we needed to add another team member who was smarter than us. We needed someone to keep us organized and moving in the right direction. The best person I could think of for the job was my older sister. If you want someone to keep you in check, hire your bossy older sister, who also happens to have a good heart. She keeps us on task, focused, and just happens to have a ridiculous education (Stanford MBA) with relevant business experience. We are stoked to have her on our team.

If you are feeling a little nicer after reading our Q&A with Brent click your way over to www.dudebenice.com and purchase a t-shirt. Dude. be nice and support his worthy cause.

One Response to DUDE. be nice