Rihanna “Pour It Up” [VIDEO] 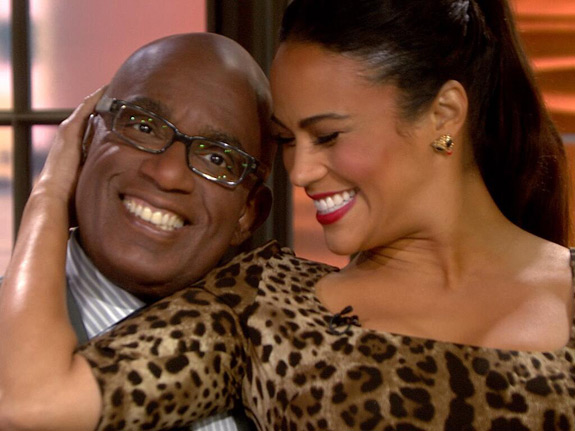 Robin Thick’s wife Paula Patton is as cute as a button and super flirtatious. We often find ourshelves asking what’s not to like about her? She’s always super bubbly and she took the entire Miley Twerking fiasco in stride.

During a recent appearance of Bravo’s Watch What Happens Live, the 37-year-old actress said, “I didn’t know if they thought Miley was going to sit down and play piano like Alicia Keys. Her song’s about taking molly!” She also went on to say, “Honestly, they rehearsed for three days beforehand, and I don’t know how not to dance with someone having their booty in your … all my friends do it like that,” she explained. And I don’t really know what the big deal is.”

Illustrating how much of a good sport she is, Paula appeared on the Today Show to talk about her upcoming movie Baggage Claim and gave Al Roker her best rendition of twerking. It was more like backing that thang up, but clearly Al didn’t care. He was definitely excited and we were to.

When Al seemed to question her hubby’s choice of clothing for his now infamous MTV VMA performance with Miley, Paula said, “First of all, his outfit was fly… Secondly, he was wearing pants so there was nothing to wash off. It wasn’t a naked show!” We will let you be the judge of that “interesting” outfit and on Paula putting her backside on Al’s front side.