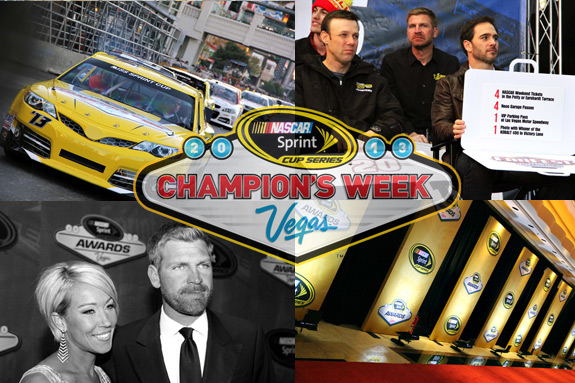 For the fifth consecutive year, NASCAR rolled into Las Vegas to celebrate the 2013 NASCAR Sprint Cup Series Champion. Champion’s Week is a celebration of the entire season, including the 13 Chase for the NASCAR Sprint Cup drivers, their families, and the loyal fans who follow the sport. Sin City served as the perfect backdrop for this high-style celebration. Over the annual four-day extravaganza, fans enjoyed plenty of fun activities, luncheons, media events, and a stellar awards show. I was lucky enough to attend everything. 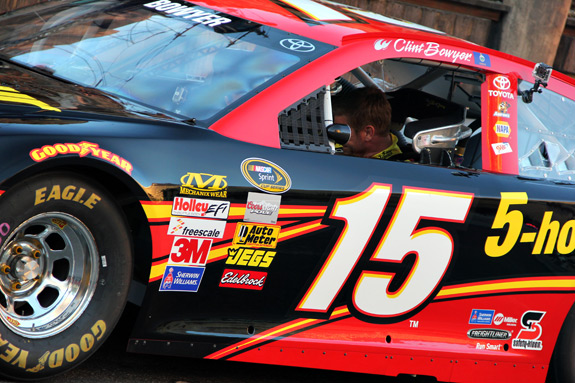 With all 13 Chase Drivers present to strut down the red carpet, this post-season party included a world-class guest list that combined Las Vegas style with NASCAR’s spirited energy. With a party that good, what happens in Vegas won’t stay in Vegas very long. Here’s what went down.

Some Expected Wins and Shocking Twists At The Lunch
As one of the first events, the 13 Chase Drivers attended the annual NASCAR National Motorsports Press Association Myers Brothers Awards Luncheon at the Wynn Hotel. As expected, Dale Earnhardt Jr. was voted the sport’s most popular driver for the 11thconsecutive year. Danica Patrick’s beau Ricky Stenhouse Jr. was named the Sprint Cup Series’ Sunoco Rookie of the Year. 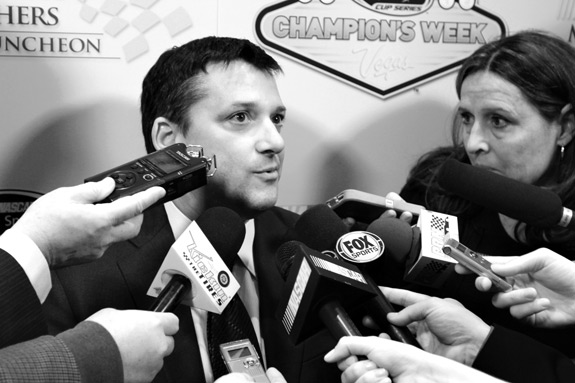 In an unexpected turn, three-time NASCAR Champ Tony “Smoke” Stewart (who is still recovering from an accident that ended his NASCAR Sprint Cup Series Championship hopes for 2013) received an award for his outstanding contributions to the sport. Smoke organized, promoted, and was the host of the first MudSummer Classic, the first national series race on dirt since the 70’s. His surprise appearance at the luncheon sent media into a frenzy. 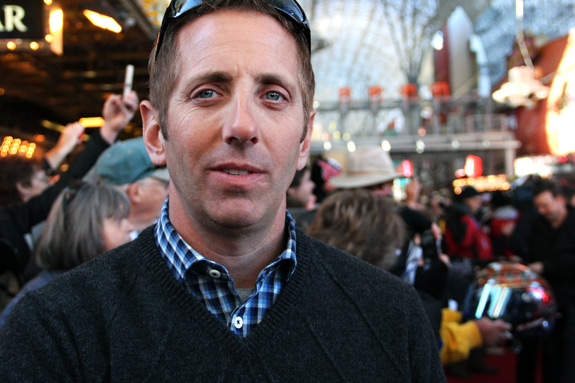 NASCAR Drivers Spend Quality Time With Their Fans
Many will tell you that NASCAR fans are the best. These sports followers are passionate, loyal, and fun – maybe even a little fanatical. Champion’s Week gives these supporters some time to rub elbows with the stars of the track. The Las Vegas action started with Fanfest, presented by the Las Vegas Motor Speedway at Fremont Street. 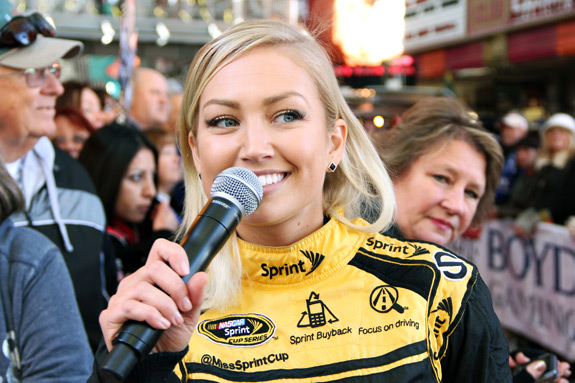 This was a chance for fans to interact with the drivers at a Deal or No Deal type-show on stage. Miss Sprint Cup Kim Coon along with Miss Sprint Cup Brooke Werner hosted the light-hearted game, and comedic personality Clint Bowyer with other Chase Drivers entertained the crowds as the unofficial entertainment. A few lucky fans reaped great rewards during the game, as suitcases revealed prizes including tickets to NASCAR events.

The 13 Chase for the NASCAR Sprint Cup drivers took to Las Vegas Blvd to do a very unusual Victory Lap, which gave fans a chance to see their favorite driver up close and personal. Thanks to the members of the NASCAR Drive for Diversity Pit Crew Development Program, the drivers took carefully planned pit stops along the famous boulevard astride the cheering crowds. 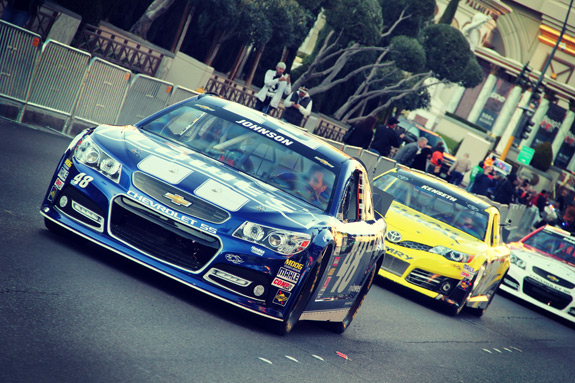 The city of Las Vegas rolled out the red carpet – closing down one of the most famous boulevards in the world. In lieu of the usual action, NASCAR fans lined the sidewalks of the strip as the Chase Drivers showed off some incredible donuts. As a NASCAR fanatic, my favorite moment of this week was riding on the back of a truck with several professional photographers while witnessing all the action from the front and center. 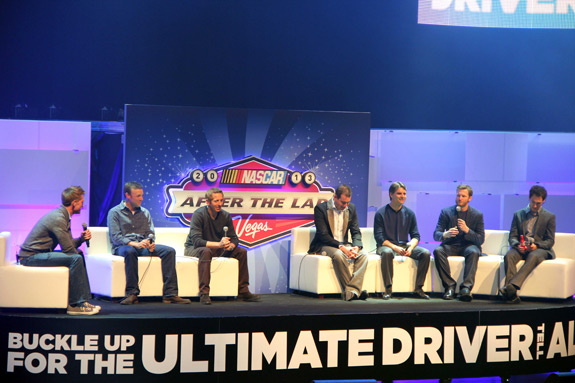 Once the Victory Lap was complete, Drivers and fans headed over to the Palms Casino, where all 13 Chase for the NASCAR Sprint Cup drivers continued the fun at After the Lap. Hosted by ESPN’s well-known Marty Smith, the event promised even more than expected as Dale Jr. talked up a storm. While Dale Jr. is not known as a big talker, he went on to share more about his personal life, including his addiction to eBay. Dale talked so much that even Clint Bowyer was outdone. “I’ve never heard Dale Jr. talk that much in my life,” he joked. It was an interesting and intimate conversation that race enthusiasts enjoyed thoroughly. 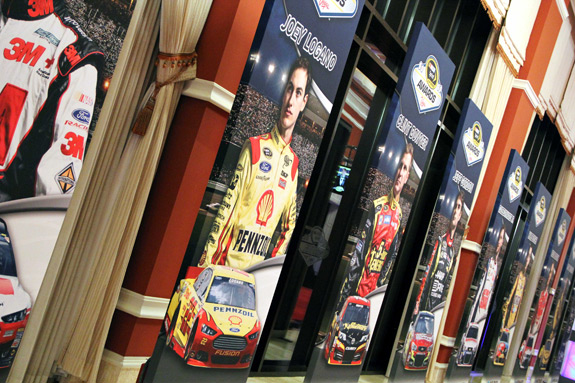 All Business At The NASCAR 2013 Motorsports Marketing Forum
We not only had an opportunity to experience all that NASCAR had to offer during Champions Week, we also had a chance to attend the Street & Smith SportsBusiness Journal Motorsports Marketing Forum, considered the motorsports industry’s most comprehensive business forum. This year’s attendees included Steve Phelps, Senior VP & CMO of NASCAR and Jimmie Johnson, 2013 NASCAR Sprint Cup Series Champion. The latter shared personal stories, sources of motivation, and plans for the future. He even confessed that his aunt helped him write his personal letters.

“The toughest thing for me is to sit down in a meeting and tell them what my brand is. I don’t know what it is,” said Johnson. “The brand is important, but the brand to me that’s most important is hoisting those trophies.” As a six-time NASCAR Champion on the verge of becoming the sports all-time winner, we find it hard to define his brand besides saying – He’s a winner! 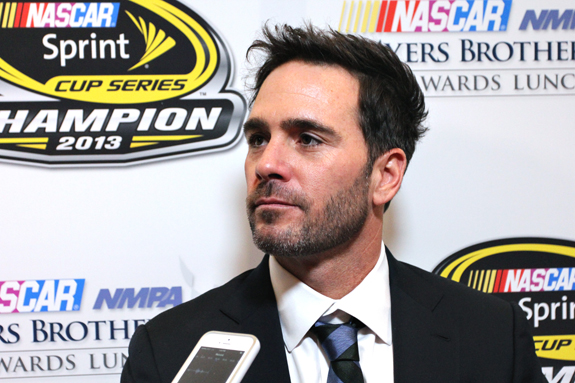 Here were some other notable highlights:

– Jacqueline Hernandez, COO of Telemundo Media, delivered a powerful presentation on the Hispanic marketplace and it’s potential impact on NASCAR.
– Zane Stoddard, VP, Entertainment Marketing and Business Development, NASCAR, sat on a panel with Dylan Kwasniewski, Driver, NASCAR K&N Pro Series East, and Ryan Schumacher, Manager, National Sponsorship, Sports Marketing, Sprint. The group had a lively discussion about distributing digital content.
– Sam Flood, Executive Producer, NBC Sports & NBC Sports Network, was also in attendance and he brought Hall of legendary driver Jeff Burton on stage to announce that he would be joining NBC’s broadcast team in their return to NASCAR in 2015.
– Gary Darcy, Senior VP, Marketing, NHRA, talked to the audience about the ultimate fan experience.
– Author Bob Beaudine delivered a powerful presentation entitled “The Power of Who,” a play on his best-selling book. Bob is also the CEO of Eastman & Beaudine, a leading executive search firm in college and professional sports.

The well-known writer garnered plenty of attention and accolades. The Wall Street Journal named Eastman & Beaudine the “Top Recruiting Firm in College Sports,” and Sports Illustrated named Beaudine, a popular speaker in public forums, the “Top Front-Office Matchmaker in Sports” as well as the “Most Influential Man in Sports You’ve Never Heard Of”.

One of my favorite segments from the forum was Lesa France Kennedy, CEO & Chairperson, International Speedway Corp. and Vice Chairperson, NASCAR. Forbes had named Kennedy “The Most Powerful Woman in Sports” in 2009. During this event, she discussed “Daytona Rising” and the reimagining of Dayton as the track for the future through a $400 million dollar facelift. This plan projects an impressive layout with 1600 video screens, 40 escalators, 100K+ seats, Wi-Fi, luxury suites, premium bars, and more. With exciting things to come, there should be even more to celebrate in the future. 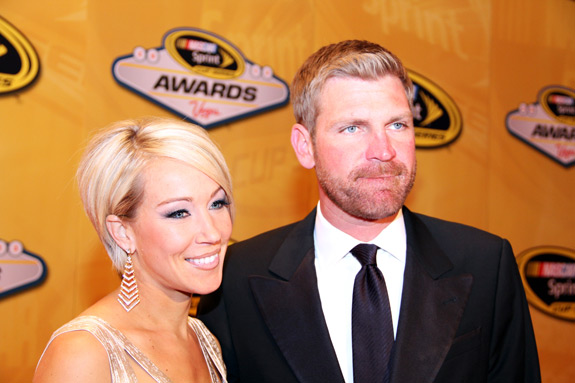 NASCAR Champions and Their Wives Grace The Red Carpet
THE NASCAR Sprint Cup Series Awards were all about six-time champ Jimmie Johnson and the master of ceremonies, comedian Jay Mohr. At times, Jay seemed to steal the show. As soon as Jay hit the red carpet, he delighted crowds with jokes. 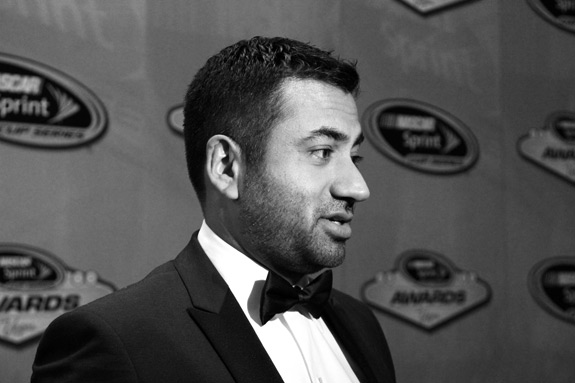 Jay Mohr revved up the crowd and was really on a roll, with no subject off limits. He made a poke at Danica Patrick’s relationship with Rookie of the Year Ricky Stenhouse Jr, saying, “Danica, I hope you’re not too uncomfortable tonight…I know you’re not used to being this close to the front,” much to the audience’s delight. Of course, Danica didn’t find the joke that funny. No one was safe as Jay took a shot at Dale Earnhardt Jr., Jeff Gordon and Clint Bowyer, who many blame for altering the Sprint Cup Championship Chase.

There were plenty of funny one-liners, but the event had its share of serious moments as well. As a highlight that resounded with all in attendance, Jimmie Johnson humbly accepted his sixth NASCAR Sprint Cup Series champion award with a tribute to Nelson Mandela. He quoted, “Sport has the power to change the world. It has the power to inspire. It has the power to unite people in a way that little else does.” And in this moment, as the audience shared the laughter and the little moments – the world leader’s famous words hit close to home.

During this Las Vegas strip takeover, NASCAR drove home the entertainment, commitment to fans, and big plans for the future. The most famous drivers showed up in the fastest cars for a party that really wrapped up the 2013 season the right way. Like everything else NASCAR, this memorable experience in Sin City was all about high speed, spectacular style, and the sport’s most beloved celebrities.