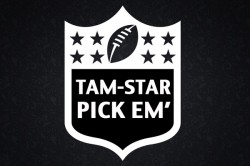 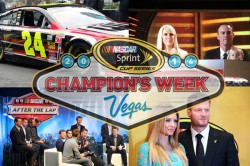 Entertainment And Business Collide in Las Vegas at NASCAR’s... 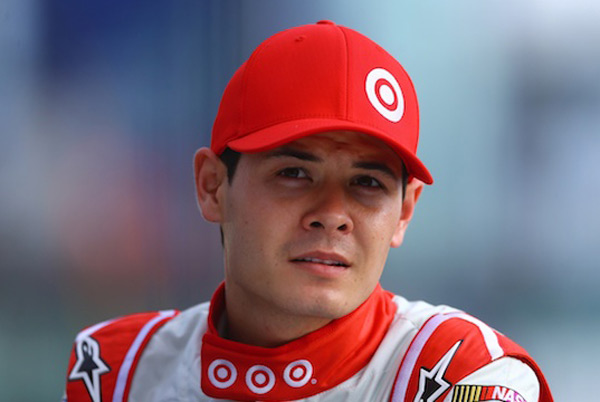 It’s very fitting for Kyle Larson to be driving the No. 42 Target car for Chip Ganassi Racing because he’s been taking aim and hitting his targets for several years now. Kyle has been racing since he was just 7, and has quickly risen through the ranks of NASCAR, making his debut in 2012 in the Camping World Truck Series, moving to the NASCAR Nationwide series in 2013 and now, just a year later, the Sprint Cup Series in 2014.

Larson, a Japanese-American, was the first Drive for Diversity participant to win a Rookie of the Year award (Nationwide Series 2013) in a NASCAR national touring series, although it’s not an added pressure in his mind…”I didn’t grow up any differently, so I don’t really think about it any differently.” He may consider himself just another driver out there, but with a stellar year, including five top-five finishes, he’s a likely contender to be the NASCAR Sprint Cup Series Sunoco Rookie of the Year. That’s not easy to do, considering this year’s rookie class was one of the strongest in recent memory. Bullseye!

Although he fell short to qualify for the Chase for the NASCAR Sprint Cup this year, that’s not slowing him down. Tam-Star caught up with Kyle to discuss his life on and off the track, including his rookie campaign, the Ganassi Sound Garage project, why he takes in a little HGTV whenever possible, and his unexpected talent away from his car. We won’t spoil the fun just yet, but would you believe a hula-hoop is involved? Kyle Larson has a lot to share. He may still be a rookie in some sense this year, but he’s just getting started and on target for years of success. 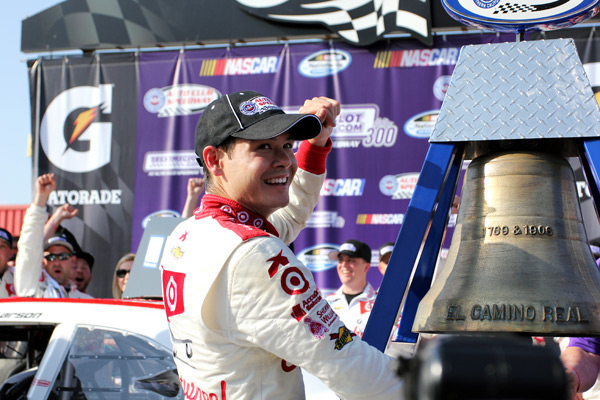 Tam-Star: What has been the most difficult thing about transitioning from Nationwide to Sprint Cup?

Kyle: The most difficult thing is probably the competition level is really good. Everybody in the cup series is the best at what they do. The teams are all really good, they build great race cars, so I’d just say the overall depth and quality of competition has been the toughest.

Tam-Star: Coming into the season, this rookie class is considered the deepest in many years. How do you feel about your chances of becoming the Sunoco Rookie of the Year?

Kyle: Yeah, I think our chances are really good. I haven’t really looked at the points battle, but I’m pretty sure we’re well ahead of Austin right now. We’ve had a lot of good runs, a couple of times we were even close to winning races, so I think my shot at winning the Sunoco Rookie of the Year is pretty good this year.

Tam-Star: I’ve interviewed my share of NASCAR drivers and I’m always worried about asking the right questions. What has been the dumbest, or shall we say the weirdest question, anyone has asked you so far?

Kyle: The weirdest question? I guess, a weird question but not really a dumb question is have you ever gone to the bathroom in your car?

Kyle: It’s a pretty good question for fans that maybe don’t know, but I’ve never gone to the bathroom in the car, but I know a lot of people do. 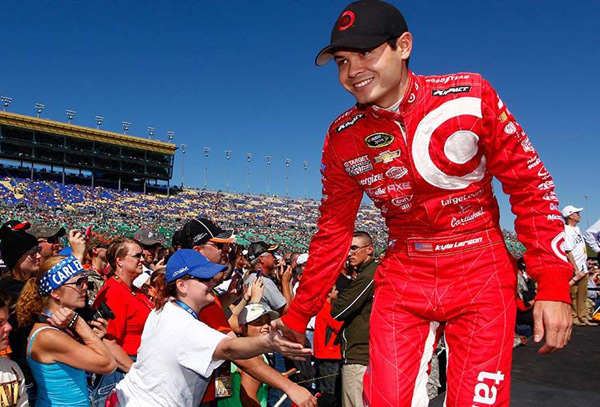 Tam-Star: Okay, what’s the craziest thing a fan has done to you?

Kyle: The craziest thing a fan has done to me? I think it was this year, I can’t remember what race it was, at Talladega maybe. A fan dressed up in like a full-on body, skin tight, white suit thing, not like a suit, but elastic around your whole body. And he had this tape around him with a big target and my name on it, which was pretty cool and different.

Tam-Star: My gosh, that’s great for the sponsor, for Target.

Let’s have a little prediction time, which four drivers do you think will be competing for the Sprint Cup when we get to Homestead in November?

Tam-Star: Can you talk a little about the Chip Ganassi Racing Sound Garage project that you’re working on?

Kyle: It was kind of a unique way to get millennials and kids my age and younger interested in our team and NASCAR. We had Cassadee Pope at the shop for a concert. We had a red carpet event and everything before. And me, Sage Karam and Dylan Kwasniewski, it was just we were there to have fun with the fans, take pictures, and we did like a fun Q&A on stage. I did some hula-hooping. Dylan did some lip-syncing, and Sage walked on his hands, which was pretty cool, but it was a pretty good turnout and the concert was really good.

Cassadee is a great singer. She won The Voice a few years ago. She was on Blake Shelton’s team and I definitely think it got those kids excited about what we were doing. I know a lot of the girls were interested in Dylan too, so I’m sure they’ll be around for a long time.

Tam-Star: What did you think about Mikey [Michael Waltrip] Dancing With the Stars debut?

Kyle: He’s got some good competition. He’ll have to step up his game a little bit, but he’s definitely got some guts to go on there and dance in front of a huge audience like that. I know I wouldn’t be able to do that.

Tam-Star: Yeah, Mikey is crazy. In fact, speaking of Mikey, earlier this year, when you took second place in Fontana, Mikey caught me off guard with this whole Donna Summer skit on Fox, that went viral. It was on TMZ and all these other places. I’m sure on Dancing With the Stars, if he doesn’t win, at least he’ll be funny to watch because he’s just a funny guy in general.

Kyle: I think he can make it a few rounds just by being funny. He’ll get some votes.

Tam-Star: I’m not sure if you watch TV, but if you had an opportunity to go on a reality show, which show would you go on?

Kyle: My favorite reality show is MTV The Challenge, even though I don’t think I would do very good on it. I just think it would be fun to go on there and compete.

Tam-Star: I interviewed Bubba Wallace a couple of months ago and asked him a similar question, so I wanted to ask you…do you feel any extra pressure or obligation as a Japanese-American driver?

Tam-Star: Gotcha. What’s a typical day like for you?

Kyle: A typical day? I don’t know, nothing too crazy. We only get to spend a few days home a week, so I like to just really hang around my apartment and do nothing. Right now, my house that I bought recently is being remodeled, so we’ll go up there once or twice a week to check on that and meet with the interior decorator, the contractor.

Then when we come home at night, some HGTV to help get some ideas and things like that, and other than that, not a whole lot, maybe going to the lake or something if it’s nice outside.

Tam-Star: Okay, sounds like you’re a pretty chill guy. I’m sure you’ve had this question already, but I’ll ask. I once read Jeff Gordon is your favorite driver growing up. What was it like racing him the way you did in Chicago?

First day of first grade for me. This must have been my favorite outfit. @JeffGordonWeb pic.twitter.com/mb4pGGrnMk

Kyle: Yeah, Jeff is somebody a lot of people looked up to when they were young. To race Jeff Gordon like that for I guess it was a second place finish at the time, it was cool. It’s not anything you think about while you’re battling him, but once you get done and people point it out, you kind of think about it and realize how cool and special it is. And I’ve seen a lot of people say it reminded them of Dale Earnhardt battling Jeff Gordon when he was first coming onto the scene, so that part of it made it really cool.

Tam-Star: Speaking of legends, if you could do a ride-a-long with a legendary NASCAR driver, who would you pick?

Kyle: A legendary NASCAR driver, does it have to be in a NASCAR?

Kyle: I think it would be fun to go ride in a two-seater Sprint car with Tony Stewart. I think that would be a lot of fun.

Tam-Star: Well, let me tell you I like you Kyle because Tony Stewart is my favorite driver. I have to put that out there.

Tam-Star: What would you like people to best remember you as when your career is over?

Kyle: Somebody that raced really hard and never gave up, and raced with a lot of heart. And somebody who was really good in a lot of different types of vehicles because I like to race a lot of stuff besides the NASCAR stuff. So just being known as somebody who never gave up and was pretty versatile in everything they got in.

Tam-Star: If you weren’t driving for a living, what do you think you would do?

Kyle: I honestly have no answer. I’ve been doing this my whole life and have never really been good at anything else or thought about being anything else, so I don’t know what I would be doing.

Tam-Star: Last question and I’ll tie it into your teammate, Jamie McMurray. When I interviewed him he told me that people would be surprised to know he washes his hands 40 times a day.

Kyle: Well, up until recently, I think people would be surprised to know that I like lettuce a lot, but I’m pretty sure it’s well known now. And being able to hula-hoop is another thing. Up until this year I thought it was a secret, but I do it every week now it seems like at sponsor appearances. So I don’t know, let me ask my girlfriend really quick?

Tam-Star: That’s interesting. You should probably talk to Serena Williams. If you ever have a chance to meet her, she’s like a huge karaoke person. She’s known to go to karaoke in other countries, from what I hear.

Tam-Star: Invite her out, but make sure you bring your girlfriend. It could get interesting.

For more information on Kyle, please visit his official website kylelarsonracing.com and ChipGanassiRacing.com. You can also follow Kyle on Twitter @KyleLarsonRacin. For Kyle’s racing stats, make sure to take the jump over to NASCAR.com.