Tam-Star: Okay, I knew you were going to say Miami, right. Okay, so here’s a little trivia question for you. Which Heat player body slammed NY Knicks player point guard Charlie Ward during game 5 of the 1997 eastern conference semi-finals? Would you say a) P.J. Brown or b) Alonzo Mourning? 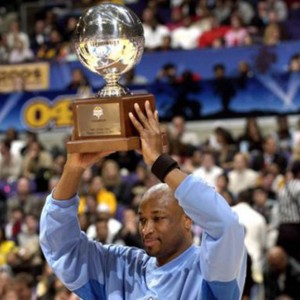 Voshon: Yeah, I remember, I was right there.

Tam-Star: If the NBA decided to update their iconic logo and use another player’s image besides Jerry West, which player would you suggest?

Voshon: Oh, no doubt it would be Michael Jordan.

So, if you were a GM and you were putting a team together, who would you take Kobe or Lebron?

Voshon: I would pick both of them.

Tam-Star: You only have one choice, Kobe or Lebron.

Voshon: That’s a tough situation to be in when you gotta pick ’em like that. I’d probably have to go with Kobe.

Tam-Star: Okay, so still being the GM and you were hiring a coach who would you take, Jeff Van Gundy, my man Pat Riley, because I used to be a Lakers fan. I’m more of a Kobe hater than a Lakers fan at this point. Nonetheless Van Gundy, Pat Riley, or Phil Jackson?

Tam-Star: Name your top 5 greatest NBA players of all time.

Voshon: Well you said I could only pick 5, I can’t pick 6 right?

Tam-Star: Yeah! Okay, so here’s an offbeat question for you, best rapper of all time, Biggie or Tupac?

Tam-Star: Greatest HBO show of all time, Sopranos or Oz?

Tam-Star: If you had to pick one player as the toughest competitor on the planet who would it be?

Voshon: In today’s NBA game? I’d say it would probably be Manu Ginobili.

Tam-Star: Who has a better body, Rihanna or Ciara?

Tam-Star: What do you miss about playing in the NBA?

Voshon: I’d guess the traveling part, like I said earlier, to different cities and meeting all the important people. And not just important people, I mean anybody that’s interesting.

Tam-Star: Can you share your thoughts on Miami’s big three? That’s like the hot question right now.

Voshon: Well, Pat Riley put a team together and got those guys in, they’re doing a good job. Anytime you’ve got three guys like that you’re bound to win a championship, so all we can do is sit back and wait. We’ll know at least by June 12th.

Tam-Star: So you think Miami is going to take out Dallas?

Tam-Star: I was rooting for OKC, but I’m sure Miami can take out Dallas.

What would people be surprised to know about you?

Voshon: If they met me they’d say that I’m always a nice person, loyal. Sometimes when you don’t meet people and you see them on TV sometimes stereotypes come in…oh, he’s an NBA player, he thinks he’s all that. But it’s not really like that when you meet some people.