Rob Ryan’s Play Chart Includes A Picture Of A... 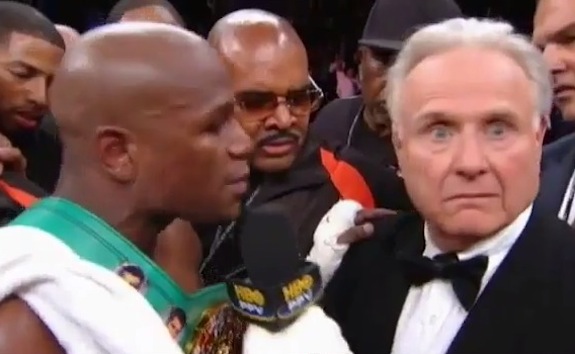 Larry Merchant’s face says it all. After one of the most bizarre fight endings in history, how could you not expect an even wilder interview.  Like Michael Vick’s return to Atlanta on what one ESPN analyst called his “Redemption Tour,” Larry Merchant’s soon to be legendary interview with Mayweather may have upstageed the actual fight.

By now you already know there was an intentional head-butt by Victor Ortiz followed by a questionable one-two punch combination by Mayweather that caught Ortiz off-guard and ended the fight. For those that didn’t bother to waste money on the pay-per-view fight you missed the action between Larry Merchant and Mayweather. As always, Larry was pushing for an answer and in what could be the best post-fight interview of all-time, Maywather gave him more than what he bargained for.  Considering Larry Merchant has been accused of always being drunk at every fight he commentates, his response was funny, but not surprising.