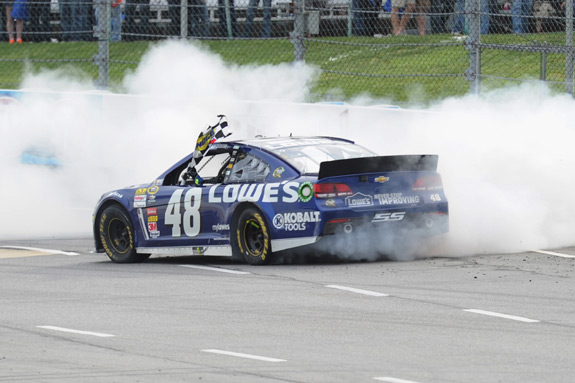 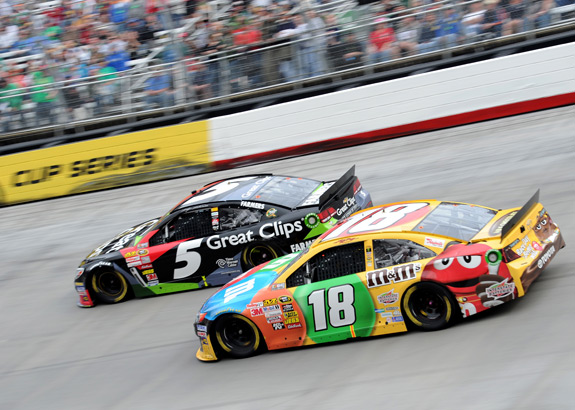 Kasey Kahne with the win! After spending a week in Austin for South by Southwest, it was great to be home to watch NASCAR. The Food City 500 at Bristol Motor Speedway in Tennessee proved to be one of the most exciting races so far this season, with Kahne taking the checkered flag. 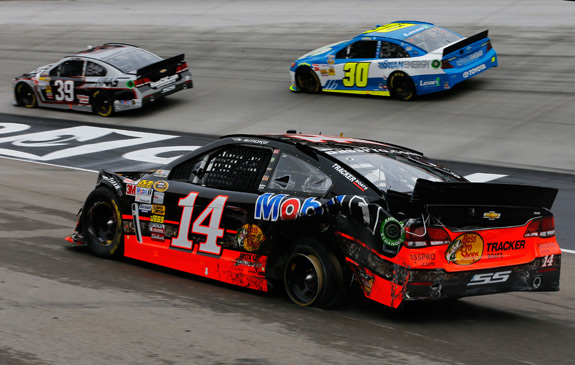 With a total of 10 cautions during the race, the first came when Tony “Smoke” Stewart crashed just 9 laps into the race after his left rear tire blew. Tony returned to the race, but he finished 31st, while teammate Danica Patrick had another disappointing run, completing only 495 laps for 28th place.

Jamie McMurray crashed into the wall during lap 70, bringing out the third caution, but he would rally to finish 10th. During lap 390, the ninth caution flag was waived. Jeff Gordon and Matt Kenseth were running 1st and 2nd when a flat tire caused Gordon to spin out. Kenseth ran right into the back of Gordon, causing severe damage to his car and eventually knocking him out of the race. Both cars were seriously damaged. Jimmie Johnson also blew a tire and hit the wall, bringing out the tenth caution flag with 44 laps remaining.

The final caution proved to be the most interesting. Keselowski appeared to be primed to win the race, but as the green flag came out he seemed to spin his wheels, which allowed both Kahne and Kyle Busch to pull ahead. Both Busch bothers ran well, with Kyle finishing 2nd and Kurt 4th, but the brothers may have Joey Logano and Denny Hamlin to thank.

“Got a good restart. I think Brad must have spun his tires a bit. I still had Kyle right on me. We were able get away from him. That felt really good.” ~ Kasey Kahne

Keselowski believes he was run over on the restart after Denny Hamlin bumped the back of his car. Denny Hamlin dominated the race leading 117 laps, but he hit Joey Logano on lap 390, sending both drivers spinning. Hamlin banged the wall multiple times in the last few laps when he blew a tire, losing two laps to finish 23rd. Logano finished a disappointing 17th. It’s worth noting that Hamlin sent Logano spinning in turn 2 on lap 348, as both drivers were in hot pursuit of the race leader at the time, Jeff Gordon.

Kahne proved to be too much for everyone at the end. Following Kasey Kahne’s victory, Hamlin went after Logano. He headed straight for Hamlin’s car, where he had to be restrained by Hamlin’s crew. It’s worth noting that Hamlin and Logano had Twitter beef after the Daytona 500, so tensions were already high between the two of them.

“He said he was coming for me…” ~ Denny Hamlin

Dale Jr., who is currently second in the point standing in NASCAR’s Sprint Cup series, kept his streak going with his fourth consecutive top 10 finishes. Brad Keselowski, who is the current points leader, came in 3rd place. All in all the Food City 500 at Bristol was an awesome race and the Logano-Hamlin confrontation made for some good TV toward the end. I don’t endorse driver-driver altercations, but it surely is fun to watch.