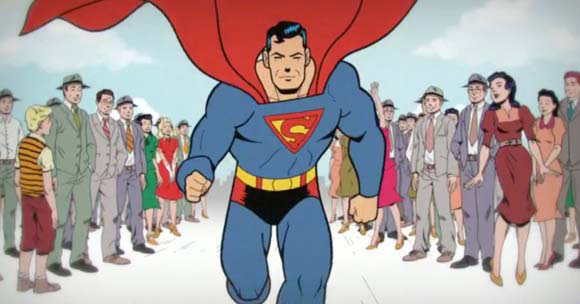 To commemorate Superman’s 75th Anniversary, Man of Steel director Zack Snyder teamed up with animator Bruce Timm and Warner Bros to create a two-minute short animated film that traces the Man of Steel’s history. The short follows Superman through the years, from his first comic book appearance debuting on the cover of 1938’s Action Comics #1 to this year’s Man of Steel. Highlighting Superman’s many incarnations, the anniversary animated short covers comics, movies, video games, and pop art. If you are a Superman fanatic the animated short is a must-see. Check out the video below and let us know what you think. If you want a complete breakdown with reference points and details of the film take the jump over to the DC Comic blog for their 75 points of annotation about the Superman 75th Anniversary short.

– Why doesn’t Superman fly off the cover of Action Comics #1? That’s because he didn’t yet have his power of flight in 1938. That also came later.

– Everyone knows the iconic globe on top of the Daily Planet building, but did you know it didn’t originate in the comics? Its first appearance was in the Fleischer Studios cartoons. (Specifically, “The Arctic Giant,” which first aired in 1942.)

– While most people think of The Adventures of Superman as a black and white TV show (and it’s represented as such in the Superman Anniversary short), this isn’t entirely correct. More of the episodes were actually shot in color!