But after the game you should’ve saw Chris and Jalen, they knew they were going to go to Michigan. You should’ve seen them guys come up – “We’re gonna be like you all, man, we just like you all.” But we considered them our little brothers. I know Jalen may have said some things in his interview on ESPN 30 for 30, but I thought, I would like to know what those guys thought about it. I enjoyed it too.

Tam-Star: What did you think about Jalen’s comments on Duke? I mean Duke was our rivalry going to UNLV, so I think some people understood what Jalen had to say about Duke and Grant Hill, but if you don’t want to comment on it that’s fine because I know it’s a touchy situation.

Tam-Star: Okay, so we’ll move onto the next…

Larry: Let’s not move, this is Vegas.

Larry: Like I said, coach Tark had all these guys from the inner city. Jalen is from the inner city. What he’s trying to say is Grant didn’t grow up like that. Grant’s father played professional football for the Cowboys. So, Grant don’t know anything about the hood and struggling, and rolling like that. So definitely we knew what Jalen was talking about.

Now, we probably didn’t, like it, I wouldn’t want Jalen to say it in public… if you feel that way you tell Grant one on one.

The only reason I wouldn’t say it in the public is because you black, we black, he black. You know, if he grew up that way, let my man grow up that way. But Duke was filled with those clean cut players, they were the darlings of college basketball with Coach K and the way he presented himself, and mostly white. But you know, when we played against them, Tam, it was good vs. evil, that’s what was in the paper. 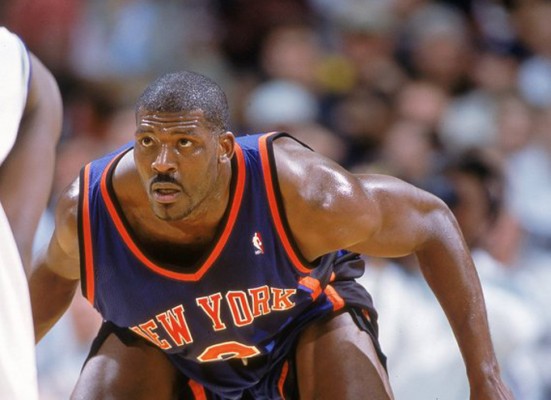 Tam-Star: I just spoke to Voshown and you mentioned him earlier. Can you talk a little bit about the rivalry between the New York Knicks and the Miami Heat?

Larry: It was big time. And we’re not talking 18, 19 year old young men. We’re talking grown men with families. Me and Voshown was cool, but it definitely got personal, like me and Zo of course, and Charlie Ward and PJ Brown, it got personal. And honestly, that’s what we were known for. We were known for wearing our heart on our sleeve. We played with that charisma, man, we played with swagger.

We’re talking about the league now. We were there…we’d hit you and we would fight you. That was a heated rivalry. The reason that made that rivalry so heated was the coaches, too. Jeff Van Gundy and Coach Riley who had just left New York, and was kind of passing that torch on to Jeff before going down to Miami. The coaches and the similarities in the coaching, it was great. I enjoyed playing in that rivalry.