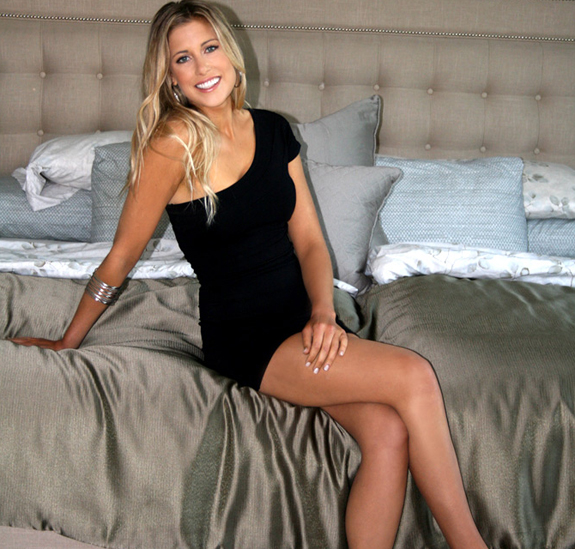 Call her a surfer, model, stuntwomen, and of course a hottie–Erica Hosseini is all that and more. A California native, she’s even been named one of the Sexiest People of Orange County by the OC Weekly. More than a pretty face seen in endorsements from G-Shock to Casio, Erica has already collected several surfing titles including winning the Volcom and U.S. Championships. From her goofy stance to traveling all over the world, Tam-Star had the good fortune to speak with Erica about her life as a surfer, doubling as a stuntwomen on ABC’s 90210, meeting guys on the beach, auditioning for a role in X-Men First Class, her involvement with Jose Cuervo’s new authentic light margarita and more.

Tam-Star: On your Facebook page you describe yourself as a 5/10″ blond hair, blue eye, goofy foot surfer from Newport Beach. What makes you goofy?

Erica: Actually it’s funny you say that, it’s not necessarily describing my personality, but I do find myself goofy. There’s two different stances in surfing and one is called goofy and one is regular. And it merely means I surf with my right foot forward.

Erica: I’m kind of notorious for doing lots of goofy things just on day-to-day life. Goofiest thing ever though… I sometimes travel with a blender to different countries because I’m obsessed with smoothies.

Tam-Star: There’s nothing wrong with that. Sometimes you have to bring your own utensils. On to your surfing resume, which is pretty impressive. What’s been your most treasured accomplishment as a surfer?

Erica: Probably the one that stands out the most was when I was 14. I broke the record at the time for becoming the youngest female or male surfer to make it to an ASP final, and that kinda’ was a pretty big deal and put me on the map; and made basically the decision in my life that I wanted to pursue being a professional surfer. It was kind of that life changing moment.

Tam-Star: How did you get involved in surfing?

Erica: I was about 11. I grew up on a beach my entire life, a total tomboy from the age of 3. My parents had me on skis, mountain bike riding, very competitive with my older brother, and I think it was just inevitable before I picked up a surfboard growing up on a beach and pursuing the next sport on the list of things to accomplish. It just kinda stuck and all the other ones fizzled out.

Tam-Star: You were a tomboy then, but you’re absolutely beautiful now. What’s the best beach you’ve surfed in the world?

Erica: I recently went to an island off of Indonesia, off of Bali, it’s called Nusa Lembongan- a spur of the moment trip in between different surf contests. It was amazing surf. It was just me and two of my friends, and we just scored the best surf — crystal clear blue water, you could see all the reef, all the fish, and it was just picturesque. 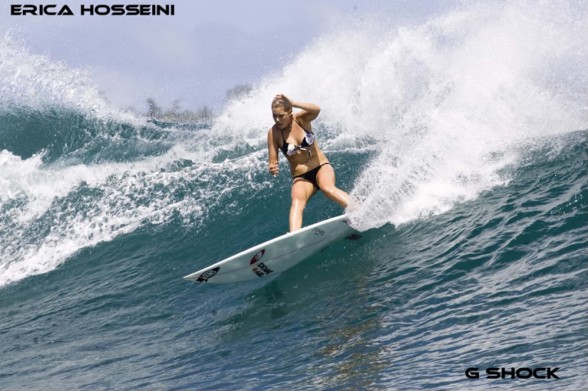 Erica: Exactly, it was one of those surreal moments. I was like I can’t even believe I’m surfing these kinds of conditions.

Tam-Star: Can you tell me what it’s like when you open a magazine and you see yourself?

Erica: When it first started happening I was in high school and my friends would see magazines and show me pictures, and it was so weird and awkward. I didn’t know what to say since it was such a new territory. But after I’d accumulated more sponsors and been advertised more in these magazines, and on TV, etc., I’m more used to it. But I don’t think that’s something you can ever get used to. You open up a national magazine and see a photo of yourself, and you’re like is this real, is it really me, or is this just the issue that I got? Does everybody’s issue look like this?