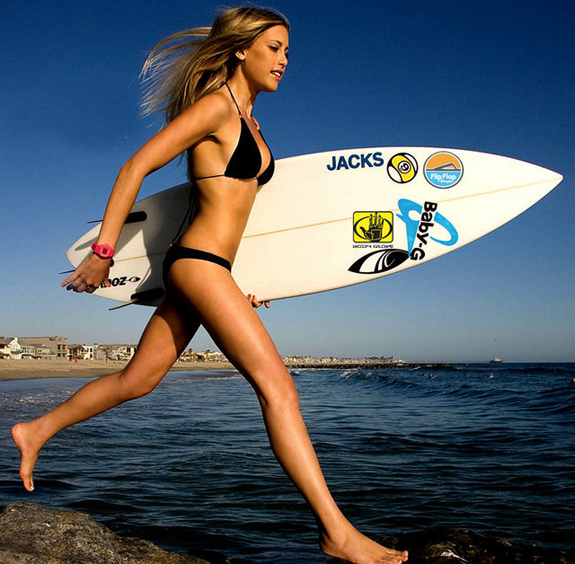 Erica: I personally don’t like when guys beat around the bush and try to dabble in stupid conversation. I think it’s better to go straight up to the girl, tell them they’re cute, and maybe start up a conversation and maybe try to find out what they’re doing that night…if there’s a function going on, and maybe just meet up for drinks. It doesn’t have to be super, like a super-committed date. If it’s just like a casual, catch you later tonight, maybe meet up for a cocktail, I don’t think that would scare me away too hard.

Erica: My perfect date would probably be something low key. I’m not a big partier. I do enjoy a night on the town, but just kind of like dinner, good conversation, maybe a fun activity of some sort, mini-golf, just the cheesy typical all around date, get to know someone and go from there.

Tam-Star: Okay, so when you’re checking out a guy on the beach what gets your attention?

Erica: I’m big obviously, you want them to have a good rig on them, a good body never hurts. And a nice tan if the atmosphere is already on the beach, but I’m a sucker for a good smile and white teeth and that whole thing. So if they can shine their sparkles away from a mile away I’m pretty much sucked in.

Tam-Star: Who do you think is gonna win the NBA finals from your girls’ view.

Erica: You know what, I do not follow basketball whatsoever.

Tam-Star: Oh, my God, so you played basketball but you no longer follow?

Erica: I play a lot of sports, but I don’t follow a lot of sports. I don’t really have the patience to follow it or keep up with it. I think it’s more fun being active.

Tam-Star:Although you no longer play basketball, if you were the captain of a basketball team, name four other female celebrities you would want to round off your team.

Erica: Oh, that’s a good one. There’s probably celebrities I’d pick that I know would be awful at the game, but I would just want them on my team so I could meet them. But then I’d probably want to pick more wisely and have like a descent team. I’d go with Cameron Diaz, she looks athletic and tall. I would go with Khloe Kardashian, she looks like she could put up a good fight in whatever sport we’re playing and throw down. I would go with Jennifer Lopez…Jenny from the block. She looks like she would be able to take some hits. And uh, let’s go with…oh, Gwen Stefani!

Tam-Star: If you were stranded on a deserted beach, name one male athlete that you wouldn’t mind be stranded with.

Tam-Star: What would people be surprised to know what about you?

Erica: People would be surprised to know that I used to competitively play chess.

Tam-Star: That’s definitely a shocker. From surfing to chess!