Known by many as the Prime Minister of Mixtapes, DJ Kid Capri is considered one of the most recognizable DJ’s in the Hip Hop arena. You may know Kid Capri as the resident DJ for Def Comedy Jam, but a little known fact is that this Grammy Award-Winning producer and self-professed “greatest of all-time” has worked with some of the biggest artists in Hip Hop/R&B including P. Diddy, LL Cool J, Busta Rhymes, Lil’ Kim, Jay-Z, Usher, R. Kelly, and Mary J. Blige. As he switches gears and assumes the role of Master Judge on the hit show Smirnoff Master of the Mix, Mankind Unplugged’s very own Tam-Star had an opportunity to speak with him about how he got his start as a DJ in the boogie down Bronx and his opinion on other legendary DJ’s including Grandmaster Flash, Red Alert, DJ AM, Jam Master Jay, and Jazzy Jeff. Never short for words, Kid also shares his thoughts on why he is considered the greatest DJ of all time.

Tam-Star: Let me start off by saying I’ve seen you DJ on countless occasions. One thing about you as a DJ is you have personality. Would you say being a vocal DJ along with DJ skills has helped your career?

Kid Capri: Oh, yeah, no question because when I do a shows it’s like telling a story. With the vocals, when I first started, it was a real big deal to people that I could rhyme and DJ at the same time. Then with the talking thing and the information I give you—that talking puts people in the mind frame where you command a role, and they’re there for you, they’re depending on you to make them feel a certain way. And what you say out of your mouth matters.

Tam-Star: For many people DJ AM is considered the greatest of all time. As someone who has witnessed the greatness of DJs like Grandmaster Flash, Jazzy Jeff, Red Alert, and Kool Herc, can you share your thoughts on what makes those DJs great?

Kid Capri: Well, Grandmaster Flash was great because of his position, where he comes from. Jazzy Jeff was great at what he does. I been told for years I’m the greatest of all time. It has nothing to do with really being better than everybody, you’re just great at what you do, you know what I’m saying?

I brought the talking into the mic, to the table. I brought getting paid $10-15,000 a night to the table. I was the first one of the superstar DJs. So all these different things started making everything more visible for the DJs. Before that they thought the DJ was just up there playing records.

Tam-Star: What DJs influenced you starting off?

Kid Capri: I was 8 years old when I started, and a DJ named B Ward, Brian Ward, he was the one that I first saw that made me know I wanted to go home and practice and try to become that [a DJ]. My mom brought me a mixer that had no headphone holes, so that’s how I got better than everybody else because I had to guess at all the spots and connectors of the records because I had no headphones to listen to.

So all the older dudes that were good were looking at me like I was a martian because I was some kid that was bustin’ their ass heavy, and it was because I had that mixer that had no headphones. There was 31 DJs on the block. I’m the only one that stayed with it. And I started dealing with this girl as a young kid; she was 13, I was 12. She said Kid sounded like a good name for a DJ, you should try it. I tried it and 2-3 months later she was killed by a stray bullet, a bullet in her chest and she died. So that’s why I kept the name and it took me to #1.

Tam-Star: Name your 3 greatest DJs of all time. 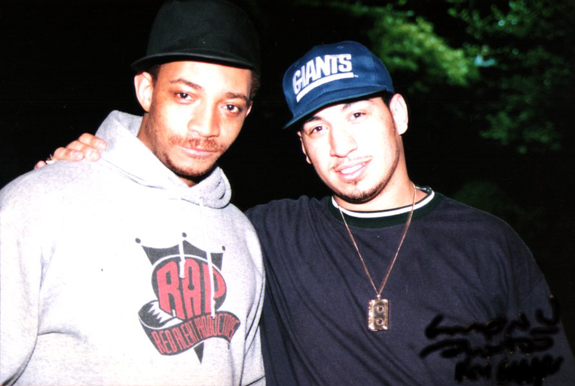 Kid Capri: Top 3 greatest DJs of all time — well Grandmaster Flash is one of them. Red Alert and Jam Master Jay. And I say those 3 not so much because they are so incredibly skillful, but it’s what they brought to the game. You know, Jam Master Jay was the first superstar as far as being with a crew. Run DMC was the first ones to open the doors in that way. Red Alert was the one that opened the doors over the radio. He was incredible on the radio and had so many years on there. Flash was the one that opened the doors from the beginning, along with Kool Herc. But there’s other DJs like Brucie B and DJ Scratch. There’s a whole bunch of dudes. Jazzy Jeff is one of my top of all time though.