The NBA Commenced A Lockout Of Its Players, But... 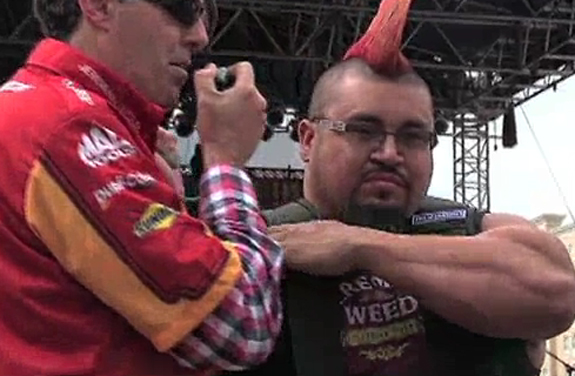 Tam-Star: How exactly did you get involved with the Jeremiah Weed campaign?

Badass Rendy: Well, I saw a lot of their videos on MTV. Some of the guys contacted me and said do you want to go shoot some videos. They had seen me on YouTube. I was like cool, come on down, we’ll do some videos. They told me about the product. I liked it and what they’re trying to do with it, so we shot a lot of videos here in my gym [Metroflex in Fort Worth, TX], and did some cool videos. Kind of old style things. The crowd really seemed to like that, like lifting tires and swinging kegs, things like that. It’s been a blast so far.

Tam-Star: I’m sure nobody has asked you, but I wanted to know… let’s talk about the flaming spiked Mohawk that you debuted for the event. What inspired you to do that look?

Badass Rendy: Well, when I compete in the Strongest Man contest and things like that, that’s my look, my trademark; everybody calls me the next Hercules. That’s like a Aztec warrior Mohawk, like a warrior going to battle, so it’s just like my trademark and stuff that every show I go and compete at, and for the aerodynamics to pull the heavy stuff.

Tam-Star: Let’s talk about Arnold Schwarzenegger. I know at some point he was your idol. How do you feel about him now amongst all the scandal?

Badass Rendy: Well, he’s still awesome; I think he did what he could as far as politics and things like that. He’s also a human being, and nobody is perfect. Him and his wife splitting up too, he kept it professional and out of the tabloids mostly. He is still my idol and I always looked up to everything he did and he’s doing now. So it’s cool, he’s still cool to me.

Tam-Star: Let’s switch gears and talk about the Cardio Queens. Most guys would be intimidated by a woman with muscles. What are your thoughts and how did you and Miss Christine [Christine DeLaCruz] hook up?

Badass Rendy: Actually she came to the gym and wanted to prepare for some bodybuilding show and a figure show. I was her trainer at first, pushing and training her hard, making her go all out. She’d still come back and say what’s next, what’s next? So, that was really a turning point for me when I met somebody that dedicated or that could actually take that much pain and say they wanted more. I was like dang! She always challenges me too, so that’s when I fell in love with her.

Badass Rendy: It was the middle of February, it was a dream, like a dream woman that she’d play in your mind, like I want a woman like that. And to think it would actually come true…for me it was like a dream come true, everything I see in her. But she’s petite too, she’s like 5’ and good muscle tone and things like that. She’s also making me do cardio with her, so that’s why they call her the Cardio Queen. They call her Rambo Barbie, actually.

Tam-Star: They call her Rambo Barbie and the Cardio Queen…

Badass Rendy: Yeah, we run in the stadiums and do miles on the track, she never gets tired. I’m like God, I need your endurance.

Tam-Star: I go to the gym a lot and a lot of guys are always checking me out in the mirror, but they think I don’t see them. What would you suggest for men who have a hard time picking up women in the gym? You’re in the gym, so what do you see as the best technique?

Badass Rendy: I think if she’s working out you should respect her time and make sure she’s done working out. Don’t be scared, just talk to her. I think a lot of women that workout hard like guys with confidence and they are not scared; but you can’t come off cocky either. So you gotta be yourself and go up there and talk to her, you never know, you might get lucky. Take your chances and slash the wrists [laughing].