Amber Rose Talks Life, What Turns Her Off, Misconceptions,... 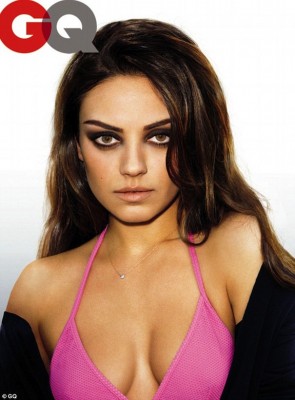 The very sultry Mila Kunis was named Knockout of the Year in GQ magazine’s annual Men of the Year issue. In August she sat down with GQ for a rather entertaining interview “…And She’s Funny, Too: A GQ&A with Mila Kunis” and the magazine caught up with her again for their December issue. In addition to being known as the girl who played opposite Justin Timberlake in the movie Friends with Benefit, Mila is currently the voice of Meg, in the animation series Family Guy.

Milena Markovna Kunis was born in Chernovtsy, in the then USSR, now Ukraine, in 1983. In Soviet context, Chernovtsy was a kind of notorious backwater. “It wasn’t, like, a full-on village,” Kunis protests with a giggle. “We had a movie theater. Streets were paved. We had a normal school.” She enjoyed those fine amenities until second grade, when her parents moved the family to L.A., picking their new home for purely practical reasons: They had relatives there. Kunis fell into acting just as pragmatically: “My English was a little janky. I didn’t have very many friends. And there was this place advertised on the radio as a place for kids to meet other kids—an acting class. My parents couldn’t afford a babysitter. They said, ‘Great, that takes up our Saturday.’ ”

Twenty years later, Kunis’s take on her profession is still amazingly free of bullshit. Sometimes she seems more like a corporate consultant in town for a five-month stint to increase efficiency at a widget plant. (She explains the shoot’s location with the phrase “We were grandfathered into the tax break.”) When I mention this, Kunis releases a huge snorting laugh and breaks into a parody of a sultry actress: “This is my art. This is what I live for… No! I love what I do, but my theory is that it’s people who doubt what they do and want to prove it to you, they’re like ‘It’s art. I create art. It’s art, art, art.’ I’m like, Holy shit, are you fucking kidding me? I run around and pretend I’m someone else for twelve hours; I record Family Guy [she voices Meg]. Then I get to go home and watch Jersey Shore.”

For more information on the Man of the Year issue and for more on Mila being named Knockout of the Year visit www.GQ.com/MOTH.