Rick Pitino Got That Tattoo He Promised And Let’s... 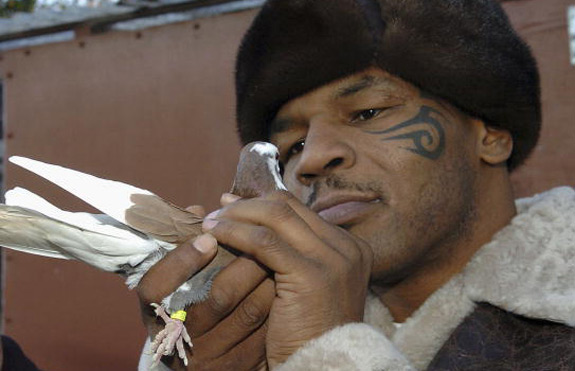 Mike Tyson is one of the best boxers the world has seen. He is well-known for things he did in and outside the ring including his first round knockouts, biting Evander Holyfield’s ear, his Nintendo game Mike Tyson’s Punch-Out!!, his crazy face tattoo, and for being the world’s greatest pigeon lover.

We have all accepted that often times the things that come out of Mike Tyson’s mouth are too strange to make up. The former boxer has been known for keeping hundreds of racing pigeons, but talking about eating his birds is just something you would never imagine him doing. Mike Tyson claims his ex-girlfriend cooked and ate one of his pigeons and even offered him a bite in a recent interview with WFAN’s Boomer & Carton show.

Carton: “Yeah? Have you ever eaten pigeon?”

Carton: “When did you try?”

Carton: “I want to hear this story.”

Tyson: “I tried. I was dating this young lady and she said, ‘I don’t know why you’re flying those damn birds, you should be eating them.’ … She happened to grab one and — and she cooked one and proceeded to eat it. And I just couldn’t do it.”

Carton: “You loved the pigeon that much.”

Boomer: “Well, cause he’s got a relationship with the pigeons.”

Tyson: “It just wasn’t the right thing to do.”

We finally got over the horrific images of Mike taking a chunk out of Hollyfield’s ear. Nice to know that now we have to imagine what if Mike would have had a helping of some pigeon. Just Gross!