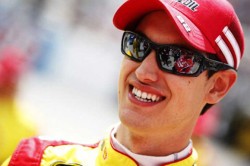 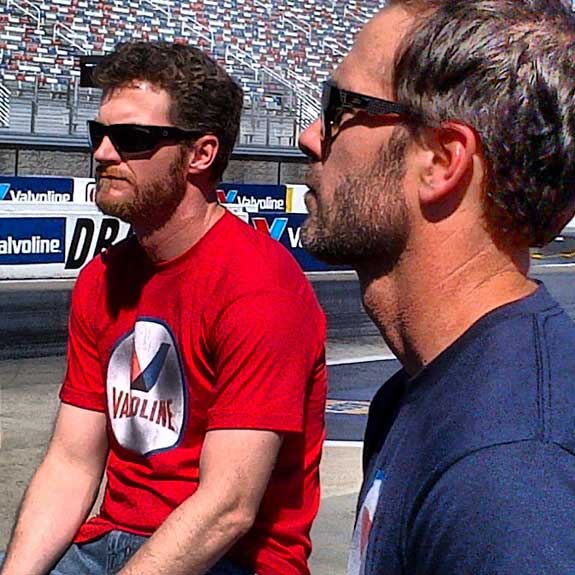 We think 140 years under the hood qualifies Valvoline to work with two of NASCAR’s most skillful drivers, wouldn’t you agree? Valvoline has reinvented motor oil for over 140 years, but reinventing cars was uncharted territory until the company teamed up with Hendrick Motorsports teammates Dale Earnhardt Jr. and Jimmie Johnson.

Earlier this year, Valvoline introduced their Reinvention Project with NASCAR Sprint Cup Series drivers Dale Earnhardt Jr. and six-time champion Jimmie Johnson. In a first-of-its-kind consumer challenge called the Reinvention Project, Jimmie and Dale Jr. worked behind the scenes to reinvent and customize two Chevrolet trucks. After much fanfare and a contest that allowed fans to guess what the vehicles would look like, Valvoline, Dale Jr. and Johnson finally unveiled the finished trucks. Before the big reveal, they had been working under wraps with the Hendrick Performance mechanics. 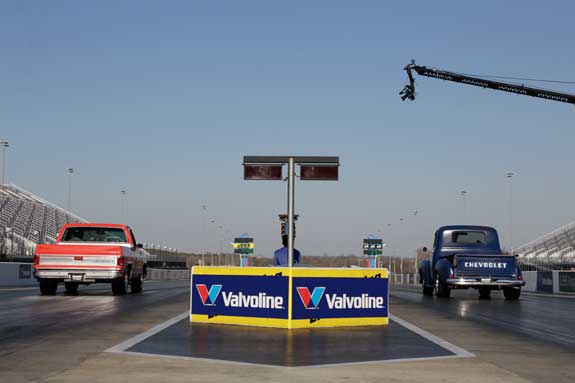 We were on hand to see the debut of the high-performance trucks and watch the popular Sprint Cup drivers inspect their finished wheels for the first time. Even better, we were given an exclusive opportunity to ride in the cars and hear the roar of the exhilarating engines right before the drivers got behind the wheel. Dale Jr. and Jimmie talked to us about the incredible transformation of the classic Chevrolet trucks. Here’s what they had to say before they buckled out and squared off head-to-head in a series of high-energy challenges, including autocross, burnouts and even drag racing. 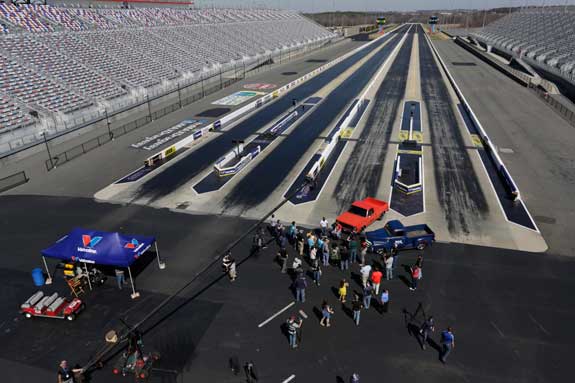 What was the most fun part about the entire process of the reinvention project?

Dale: I just enjoyed having the opportunity to design a pick-up truck without having to pay for it.

For me, picking the 1974. That was the year I was born. You don’t see them trucks really restored or too many projects with those trucks, so it was an opportunity to see what we can do and what we can come up with. If it turned out a certain way, would I be interested in actually creating my own or making a clone. Again, if it failed, I wasn’t out of anything. I felt pretty confident that they would come up with an awesome truck. I like the way it looks.

Jimmie: I definitely agree with the process of not having to worry about signing a check at the end. For me it’s pulling them off. We’ve talked about it and been working on this for a while, but to pull the covers off I should say and see the finish results; it’s been cool. We definitely been involved with various stages and helped picked things out and try to piece it together in your mind, but to see the finish project it’s always a cool rush.

What do you guys plan to do with your trucks?

Jimmie: I think they are going to give them to us.

Dale: I doubt it. Somebody is going to end up with them, but it won’t be one of these two guys.

Are they calling you 6 times, yet?

Jimmie: I heard that, yes [Laughter]

It’s the last race of the season, one, two or one two, does that still happen or do things kind of go cold war at that point?

Jimmie: [Laughing] Yeah it’s open book and we’ve been through it.

Jimmie: We might not be so descriptive but it’s all still open book.

Dale: The books are always open. It’s up to me to really look at it and try to understand it. He’s not gonna tell me everything I need to know and that’s not his job and it’s not Chaz’s job. Everybody’s transparent with what they’re doing and it’s up to each team to sort of understand and decipher how it’s working.

Dale: I’m thinking about picking one up because I get that question every week.

Jimmie: The only consistent thing is one last bathroom stop. I don’t know why.

When you guys were starting the reinventing project what made you go with trucks?

Dale: I think that was Valvoline’s idea to take the trucks and sort of see how we, you know, could just keep it in some sort of demographic and see how our personalities come out and our choices. I guess that was their idea behind it.

This last week or so Jeff Gordon punk’d Jalopnick, and scored like one of the biggest viral videos of the year. Do you think we might see something out of one of these trucks like that?

Jimmie: I don’t know, but put it back on Jeff and Pepsi Max for being as brave as they were. Man, they nailed it. That’s pretty rare to have a big corporate company to go out on a limb that far and scare the you know what out of somebody. So, that was pretty cool. I would love to participate in something like that, but I don’t know if we plan to do that.

Last year, Global Rallycross ran a bunch of races co-located with NASCAR races. Jimmie, you’ve done some off-road stuff in your past, you ever just thought that going sideways and different directions and up in the air, maybe trying Rallycross or Adrift?

Jimmie: I would love to. Even from an expert’s perspective if they were able to work the schedule out I think you’d get a couple of drivers trying to pull that off as well. I loved watching them, up here at the tracks obviously when they were there and I’d walk through there kind of carrying, talk to the drivers, look at their equipment and then go out and watch and enjoy the show. So, they’re very cool cars and I a big fan of Rally Racing in general. I think they’re some of the bravest and highly committed drivers on the planet. So, I’m a big fan of those cars.

Dale: Me? Yeah, I have no interest. I like the stock cars, if it’s got fenders and it’s in the NASCAR family or at least similar to that then I’ve got interest in it. But, I enjoy watching, like Jimmy, but I don’t have the interest in driving anything outside of stock cars.

Did you guys go online and try to figure out each others car, or try to get any early intel that way? Were you just focusing on getting the best truck you could get out of that project?

Dale: We know each other well enough [Laughing] we kind of had a good idea of what we were gonna do.

Would you like to say anything about the guys that worked on these trucks for you guys?

Dale: Hendricks’ got a good team. They got a great group of people over at their performance center. We didn’t have any doubt in our minds that it’s just gonna be awesome. They do a good job.

Jimmie: They work on a lot of my stuff. The ’49 that I drive you know, Rick found it for me and then we did a bunch of work to it through the performance center, so a lot of familiar faces and certainly comfort with everybody over there and what they can do.

Considering they have the same engines what do you think will be the biggest factor as to who wins in the trucks?

Dale: Anybody that dragged. I’ve never dragged race, he’s [Jimmie] actually been on the strip before so I think experience is hard to trump.

Do you guys have any experience with something with this much body roll?

Jimmie: True. I grew up racing off road trucks. They tipped over quite a bit so maybe that’ll help and come into play a little bit.

Jimmie, I know you’ve run the Prelude; any of you guys want to do that again this year?

Jimmie: It’s really on Tony’s [Stewart] deal. He didn’t have it last year when they had the truck series run there. I’d love to.

Dale: I wish they would take our cars there. Just like they did with the trucks, maybe eventually get to Nationwide there and eventually have an exhibition with the cup cars.

Dale: Yeah, I mean it’d be a blast to take our cars and see what they can do around there. The trucks like of fun.

When you went through with starting this project did you guys actually go to any of the salvage yards and junkyards yourself and look around? If so, what was that like and if you didn’t, do you think that’d be fun or something you’d like to do?

Dale: Yeah, I don’t think we went to the junkyards on this project.

Jimmie: No. But I used to have the junkyard as a sponsor with my street stock and I was in there getting ball joints every week.

Jimmie: When I lived in Wisconsin a friend of mine that raced parents had this salvage business and he would work very hard during the week to find totaled vehicles that still ran. We’d actually raced through the junkyard in those cars when his dad would go to sleep at night and we’d come back late at night, we had a lot of fun in junkyards. I’m sure I never take anything out of there but we certainly went in there and beat some stuff up.

What track would you like to win at that you haven’t won at?

Jimmie: We’re going to Chicago. (Laughing) I’d been able to win at my home track and experience all that and my crew chief is from the Chicago area and we’ve been close a lot. Something weird just happens, so I feel like I owe that to him after all these years, you know.

@IamStarWalker YES! for #DaleJr Your #Daytona win was a long time coming what did you do to stay determined and motivated to get to the top?

Dale, I asked our twitter followers, your new favorite tool, if they had any questions and the question that one of them had for you was: You’re Daytona was a long time coming, what did you do to stay determined and motivated to get you on top?

Dale: Just being with HMS, you know you got the best equipment, knowing you’re gonna be in good cars all the time. That’s probably a huge motivating factor, but you know the fans, stayed positive and kept pushing. And just being in the shop and all the guys working so hard and just knowing the cars were competitive and that you were gonna be in good cars every week. As a driver that’s all you can hope for is just to have some of the best cars in the garage and we didn’t have that for years. 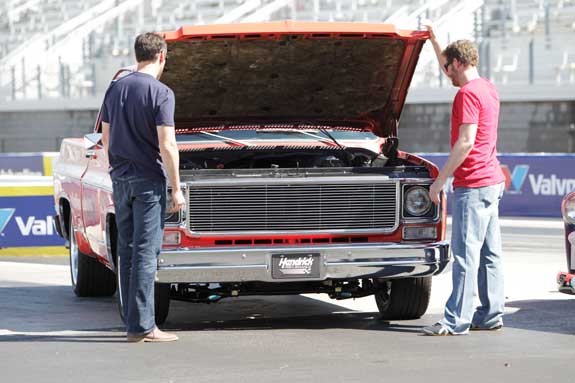 Dale Jr. selected a 1974 (the year he was born) Chevrolet Cheyenne Super 10 pickup with a 3-speed automatic transmission, a 350 V8 engine, and 21,000 miles that was upgraded to a Chevy LS3 V8 with 480 horsepower and 4-speed automatic transmission. Johnson’s 1955 Chevrolet truck was originally equipped with a straight 6 cylinder, 3-speed manual transmission that was to a Chevy LS3 V8 with 480 horsepower and a rhino-lined engine compartment. Of course Valvoline’s full-synthetic product, SynPowerTM motor oil, served as the motor oil of choice by both drivers for their high-powered, one-of-a-kind vehicles.

To see both trucks in action and watch Dale Earnhardt Jr. and Jimmie Johnson go head-to-head in their new promo for Valvoline, visit www.ReinventionProject.com. Make sure to also visit Valvoline’s official Facebook page and let them know whose truck is your favorite.